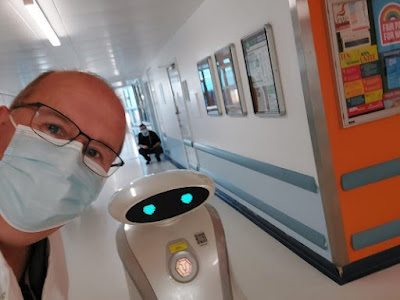 Treacle thought I didn’t see her in the darkness as she quietly sneaked into the warm spot I left in the bed as I got up. I made brekkie and watched the last episode of the current series of “Big Mouth”. Apparently it has been renewed for another season.

I then spent a few minutes stalking someone on-line. Yesterday I found a list of famous people who went to my old school. There were twenty people on that list of whom I’d heard of two. Interestingly the one who had been an MP for Brighton and must have been in my year at school rang no bells whatsoever, but I think I walked to school once or twice with the chap who was the British ambassador to Kazakhstan; he lived twenty doors down the road from where I used to live. He’s apparently now retired.

Other than endless adverts for stuff which in the past would have been given to the scouts’ jumble sale there was very little of note on Facebook this morning so I sent out four birthday wishes and I got myself ready for work… thinking of the ambassador who has retired. I don’t dislike my job. I really do like it. But… after working full time for forty years and two months (and in various part time jobs for three years before that) I think I might like to retire.

It was particularly nippy as I walked to the car this morning, and as I drove off through a bright (if cold) morning so the weather forecaster was drivelling on about showers in the South East which never came.

As I drove the pundits on the radio were talking about how Prince Charles had opened  a major new Astro-Zeneca facility. They got the bit about Prince Charles right, but the chap conducting the interview get pretty much every other aspect of virology and immunology wrong. You'd think they'd spend a few minutes priming hm before the interview, wouldn't you?

There was also a lot of abuse directed at the Prime Minister over his rather abysmal speech which he gave to business leaders yesterday. A clip of it was played on the radio; it was painful to hear.

And some vicar or other seemed to think that no matter how difficult a life an abused child or an asylum seeker had, Jesus had it worse, and was somehow attempting to claim a moral high ground that no one else was claiming.

Work was much the same as ever until the early afternoon . As I was putting blood into the blood bank (awaiting collection to take to one of the wards) so I met a new colleague. "Matilda" is a self-directed cleaning robot. Inadvertently I'd got in the way, and it (she?) said hello, cracked a joke, and waited for me to move before carrying on cleaning the corridor.

There are those who worry about the rise of the machines. Personally if I was a self-aware robot bent on world domination I wouldn't start off scrubbing my corridor.

Getting home took some doing; the motorway was rather busy and the roads locally were heaving. Pausing only briefly to argue with “Daddy’s Little Angel TM” I had a little look on eBay at Lego maxifigures and got a couple of bargains. The price of those things is amazing – the stuff which is commonplace can be ridiculously expensive; if you look carefully the obscure parts can be picked up ridiculously cheaply… when I get bored I might just post up a piccie of what to look for in Lego maxifigures – if only so that my loyal readers know what to get me for a pressie…

“er indoors TM” boiled up a rather good bit of dinner and we cracked open a bottle of plonk to wash it down as we watched the “Bake Off” final. Starting watching twenty minutes after the start of the show we could fast-forward through the adverts. Or we could have done had the Sky-Q box recorded the show.

We’ll try again on the +1 channel in half an hour…
Posted by Manky Badger at 8:56 pm