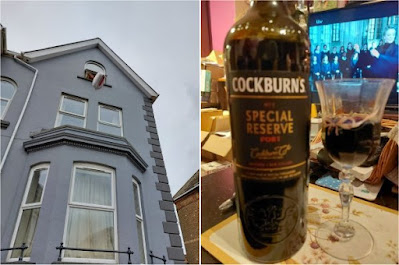 Despite the dogs being back from their little holiday I slept like a log last night. I woke, made toast and had a minor battle with the lap-top. Every week it has an update. Sometimes this is a minor inconvenience which just makes it a little slower to start. Other times like this morning I really was left wondering if it would be quicker to walk down the road to Curry’s and buy a new lap-top rather than waiting for it to fart around only to end up being exactly the same as it was before (in every respect). My car has a fancy computer, and unless the garage update it, it will stay the same as it was when I got it until the day when I get shot of it.

Eventually I got on-line and had a little look-see. Last night I sent a message asking for a hint about one geocache which had evaded us in London yesterday. The thing had a four and a half (out of five) difficulty rating so it wasn’t going to be easy to find. The chap who’d hidden it replied today saying that we had been looking in the right place, and the thing was in plain sight with “Geocache” written on it. I’ve asked for a bit of a hint(!) We also did two earthcaches yesterday and having sent in the answers to our geology homework (as well as to another question we had to answer) I’d had no replies overnight, which was a tad disappointing.

I had a look at Facebook. Quite a few people had clicked the “like” button of the photos I posted of yesterday’s geo-trip to London. There was a lot of discontent about people scamming in the Ashford area. Claiming to be running a dog rescue they were actually running a “get rich quick” scheme which is all very well for the person getting rich quick, but not so good for everyone else getting poorer.

Two people were having birthdays today. I added both onto my Facebook friends list over ten years ago, and it is over ten years since I’ve had anything at all to do with them. Neither seem to post to Facebook from one month to the next, and I decided the connection was too tenuous to warrant sending a birthday video. Getting one of those is akin to a Paul Hollywood handshake in “Bake Off” in my world !!

There had been vague plans to go to a geocaching film show today (it’s an annual thing), and also Rye Bonfire Parade had been suggested, but “Daddy’s Little Angel TM” was moving house today. With “er indoors TM” not quite ready I drove down  to Folkestone, listening to Steve on the radio. I got as far as the Channel Tunnel turn-off before the signal gave out.

I arrived at the current abode of the most recent fruit of my loin, and we carried loads of stuff down four flights of stairs, loaded up the car, went back for more until the car was full, and drove the hundred yards to her new flat. It was a shame that we couldn’t drive straight there; what with the one-way system we had to go round the houses (quite literally) to get there. Whilst “er indoors TM” and Jake did the paperwork with the new landlord I fiddled about with the car’s connection to my phone, and used it to ring “My Boy TM” who didn’t seem that impressed.

We then went back to the old flat, carried no end of stuff down four flights of stairs, loaded up the car, drove round the houses… you get the idea. It was all far easier to type than it was to do. Eventually I persuaded “Daddy’s Little Angel TM” that it would be far less arse-ache to chuck it all out of the window to where the car was parked below. Admittedly there is a limit to what you can chuck out of a second storey window with any hope of it surviving, but we saved quite a few trips up and down the stairs by doing that.

After a few hours of this “er indoors TM” arrived to join in. She timed her arrival well, getting there only seconds after the Deliveroo lady had dropped off McDinner.
As we scoffed so my phone beeped. The series of geocaches we’d hidden on Thursday had gone live.

Once we’d McScoffed we took another load down the road, and then we were at the point for heavy lifting. The furniture is scheduled to be shifted tomorrow when “man with van” will be there for the heavy lifting. I intend to go along to generally offer sage advice and get in the way whilst lifting nothing at all myself.

“er indoors TM” and “Daddy’s Little Angel TM” then wanted to go shopping for mops and curtains and all the sort of stuff you buy with a new house (supposedly). I came home and took the dogs to the co-op field where we had a rather good game of “Fetch”. Interestingly the area of the co-op field which had been sprayed with weed killer is now cordoned off.

With walk walked I made a cuppa, and had quite a few plans for the garden, but Treacle and Pogo had jumped up to be either side of me on the sofa. So I slobbed watching telly all afternoon with a dog on either side. As I watched so my phone beeped. Someone had been out and done my new Wherigo series. All worked well, which was something of a result. Despite no end of field trials there is usually something which goes wrong when the things are used in earnest for the first time.

“er indoors TM” came home and boiled up a rather good bit of dinner which we washed down with bottle of plonk and then (as I cracked open the stilton) we followed up with a bottle of port. As we scoffed and guzzled we watched the fourth “Harry Potter” film. Not a bad evening really…