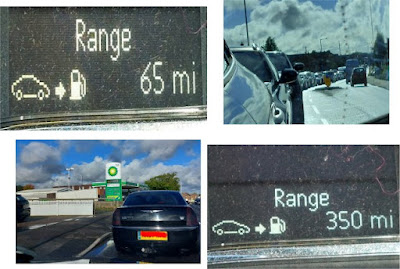 Just before midnight as I was busy night-shift-ing my phone went absolutely bat-shit-mental as Facebook and WhatsApp came back on-line and I instantly caught up with a myriad of messages and comments from people asking if Facebook and WhatsApp were broken. The news websites said that the head honchos at Facebook and WhatsApp remained rather reticent about what had gone wrong (as I suppose they might) but with it fixed I didn't feel quite so cut off from the world - you'd be amazed how much petty triviality goes on in social media in the small hours. Nothing at all worthy of mention, but you miss it when it is not there.

At three o'clock I had a sandwich and a packet of the new Thai Green Curry flavoured crisps. Have you tried them yet? If so did they give you a stomach ache too?

Getting home after the night shift was rather troublesome this morning. Finding that my car wouldn't start last night I borrowed the “er indoors TM”-mobile to get to work. Driving her car makes me nervous. Partly because it is different to my car (the gearstick is in the wrong place and it has a handbrake). And partly because if I prang it she will break my face. As I drove Radio Kent was droning on in the background. Have you ever listened to Radio Kent? I wouldn't usually bother; I would have re-tuned the radio if I was brave enough, but I wasn't. there was some dribble on the radio about the second coming of Jesus which will be in a few months time apparently. There is some comet on the way and some crackpot has figured out that pretty much every spectacular biblical event was heralded by a comet. These events include the great flood of Noah, the destruction of the Tower of Babel, the annihilation of Sodom and Gomorrah, the plagues of  Exodus, the Red Sea crossing, the Long Day of Joshua and four events associated with Jesus. In fact the only event which didn't have a comet associated with it was the Second Coming and so since there is supposedly going to be a comet at Christmas, this must herald the Second Coming. Rather odd logic really... what have all the comets of the last couple of thousand years all been about then?

As I drove down Brookfield Road I saw a queue of traffic for the petrol station where a humungous tanker was delivering petrol. Seeing the queue was only about twenty cars long I did an about-turn and joined the queue. As I waited the ENT people phoned me back and re-scheduled my appointment. Just as I hung up so the tanker left the filling station’s forecourt and the traffic slowly started to move forward. There was a minor hiccup when a car in front of me broke down and in the time it took for a few blokes to start pushing the car a gap in the queue appeared. A passing car moved as though to go in that gap when a very loud voice rang out. “You Can F… Right Off!!” bellowed that voice, and the car which looked as though it was going to jump the queue really did f… right off.

About forty minutes after I’d started queueing I got to the one petrol pump that was working. Unfortunately the garage was offering a maximum of thirty-five pounds worth of petrol to each customer. Other places have avoided the panic buying by having a minimum payment of thirty-five pounds. Oh well… if I can only half-fill a car I will have to go back twice as often.

Having stayed at work an hour later than usual, and having queued for petrol I was rather tired by the time I got home. “er indoors TM” told me that she'd had the breakdown man out last night. He tried my car and it started right away. How embarrassing. He did find there was some problem with the cam chain sensor though, and gave the details of a garage he could recommend to sort it. Bearing in mind my usual garage is booked up for weeks these days, the recommendation of a decent garage can only be a good thing. It was a shame that they too were booked up for weeks, but we’ve found somewhere that can have a look at my car next Monday.

I went to bed feeling like death warmed up and woke two hours later. Usually after the night shift I spend the afternoon doing the ironing whilst watching episodes of “Four In A  Bed” and today was no exception. Today’s show featured a particularly stupid pair who thought the height of sophistication was laminated notices, and who felt that the breakfast they offered was far and away the best since no one else had provided hash browns.

“er indoors TM” sorted out a good bit of dinner and we scoffed it whilst watching the last episode of “SAS: Who Dares Wins”. The last episode was all about resistance to torture and interrogation and in all honesty wasn’t anywhere near as gripping as the rest of the series had been. I suppose it was more realistic when you bear in mind how the Special Forces are trained… but I want entertainment.

I’m really tired. An early night is in order. I wonder if my car will start in the morning?
Posted by Manky Badger at 9:21 pm