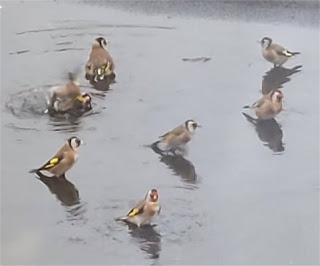 After a night racked with rather vivid dreams in which I was trying to feed boa constrictors and Burmese pythons with jam sandwiches (they don’t eat jam sandwiches!) I woke two minutes before the alarm was due to go off.

As I scoffed toast I watched an episode of “Drifters” in which our heroines were going to a school reunion to prove that they were “the cream of the crap”, then sparked up my lap-top as I do most mornings.

My Facebook feed these days is filling up with adverts for stuff which is of no interest to me whatsoever, but the comments on these adverts can be quite amusing. Take today’s advert for “Reiki Level I, II and Master Certification in Energy Healing”. Originally going for sixty quid this has been reduced to the knock-down price of fifteen quid (presumably because no one is interested in quackery) but in the comments following the advert was quite the squabble. One chap was adamant that on-line reiki courses were a load of old rubbish but ones delivered face to face actually worked. Another chap made the claim that “Your insurance is invalid if you haven't been taught and attuned in person, by a Reiki master. This is why it's cheap”. Someone had asked what the insurance was all about; apparently it was a “legal requirement”.

There was also a row kicking off in the comments for an advert for “Christian Art”. The people who were advertising Christian Art had some website into which you put all your personal details and every day you supposedly get emailed a picture of a biblical scene. Quite a few people were rather unhappy that they hadn’t received any pictures. Was it all a data-harvesting scam? You think? I wonder if any of the enraged had ever considered typing the phrase “biblical scene” into Google Images each morning?

I resisted the temptation to laugh out loud, but they let these people vote, you know.

Pausing only briefly for Munzical reasons I was soon heading up the motorway to work. As I drove the pundits on the radio were pondering as to why no one at all seems to be able to explain why the wholesale price of gas is going through the roof. It was claimed that much of the UK's gas comes from the North Sea where nothing has changed over the last few months, but two minutes on-line shows that the UK imports an awful lot of its gas. There was an interview with someone or other who was big in the energy world who made the observation that allowing people to make a profit out of a vital necessity of something like heating your house wasn't such a clever idea. Why not? Because if the Great Unwashed had to pay me to heat their house, they certainly wouldn't get it cheap. It's called "market forces" (or "screw you Jack, I'm all right, depending on your personal perspective). The observation was then made that none of this would happen under a nationalised power system. I seem to remember sitting in the darkness in the 1970s as the country didn't have enough power to run the national grid 24/7 under a nationalised system, but perhaps I misunderstood?

Capitalism, socialism. Neither seem to work that well, do they?

There was then a short preview of a program being run on the radio later in the week in which young farmers were being interviewed. One didn't like being called a "farmer" and wanted to be described as a "land manager". Doesn't that sum up all that is wrong with the world?

I got to work and did my bit on another early shift where the prospect of anti-Lu(b) raised its ugly head (as it does from time to time), but I did get a better photo of the goldfinches on the flat roof.

As always an early start made for an early finish and I made the most of the early finish by taking the dogs to the woods. We met three other groups of dog walkers… I’ll just say that Pogo is still a work in progress, and that two out of three ain’t bad.

Mind you I have got a potential issue with Treacle. Whenever I have a tiddle in the woods so she then tiddles on the spot I tiddled on. Opinion is divided as to what this means. One school of thought is that she is showing solidarity with me and showing we are all part of the same pack. Another school of thought is that she is drowning out my smell with her own and showing me that she is the top dog. Most people I’ve asked seem to favour the second theory… can’t think why.