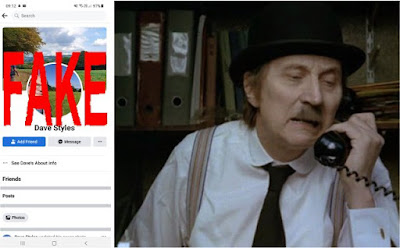 I slept like a log last night; probably a tad tired after yesterday’s walk. Much as I do love going for a long walk at the weekend, there’s no denying that I ache somewhat afterwards. Especially around the knees. Maybe the poor things are carrying too much weight. Again.

Over brekkie I watched another episode of “Star Trek: Lower Decks” then had a very quick look at the Internet. Over the weekend someone had come to Ashford and done a lot of my Wherigos and had written nice things in their written logs which was good of them. And I had an email from the bank about the question I had asked them. Why had they told Credit Karma all about my financial dealings? Because (it turns out) the bank is legally obliged to tell them. It seems that my dealings with the bank aren’t confidential at all…

I sent out birthday wishes and set off for work. Just as I got to my car a "Highways Maintenance" lorry pulled up in the road next to me. The chap in the passenger seat got out and went to the litter bin over the road. From it he pulled out a rather long length of metal-coated hose pipe (the sort of thing you have in a shower only about five times longer) and a car battery. He then put them both into the lorry, got back in the lorry and drove off. What was that all about?

I drove to work through a rather foggy morning. As I drove the pundits on the radio were talking about the Chancellor of the Exchequer's announcement that he has allocated six billion quid to clear the NHS's backlog. Well... that's very generous of him, but extra money doesn't sort out extra clinics does it? What is needed is more NHS staff time. And bearing in mind I've just had my first complete weekend off work in three months (not counting two weeks of booked annual leave) I for one am not keen to take on many more extra shifts. There is a limit as to just how much more we can all do. Quite frankly I'm looking to spend less time at work and maybe even retire.

The long-term plan for the NHS is *so* obvious... Fill the vacancies (as there are quite a few). How do we do that? By turning the clock back forty years and taking on school leavers and training them and paying for their formal qualifications (like they used to do). And stop hoping that graduates will come into the NHS having paid for their own educations when they know full well they have massive debts and can get far more money elsewhere (like they aren’t doing these days).

Under one scheme the NHS had applicants for jobs. Under another the NHS does not.

There was also reports that the average GP thinks that he average over-55 is incapable of operating health-related apps on their phones.

Should I take offence at that? I shall take that to mean I am smarter than the average over-55

I got to work where we had cakes. Lots of them. Perhaps not as enjoyable was a case of malaria. And as I worked a couple of colleagues asked if I was OK. They were worried about the messages I'd sent them over the weekend.

It turned out that over the weekend someone had copied my Facebook profile picture and cover photo, created a new Facebook account using my name, and was sending out messages about crackpot religions. I squealed them up to the Facebook feds and within an hour the fake profile was gone... but it gave us all something to chuckle about.

With work worked I came home. Just as I parked the car so “er indoors TM” and the dogs walked past. We walked home where “er indoors TM” boiled up a rather good bit of dinner then went bowling. I got out the ironing board and as I slaved away I watched a film on Amazon Prime. “Adventures of a Plumber’s Mate” is free to watch on Amazon Prime and for all that it features quite a few nudey ladies without any clothes on, in all honesty the kids of today should watch it in their history lessons so as to realise what the 1970s were like.

The snowflake generation really would lay an egg…
Posted by Manky Badger at 10:16 pm