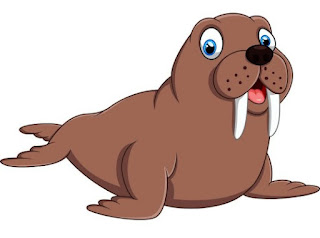 I slept through till twenty past two this morning before waking up full of beans and raring to go, then laying restless for far too long. After a while I gave up trying to sleep and got up. Over toast I watched another episode of "Squid Game" which is now explaining what I thought were some of the more obvious plot holes.

I had a quick Munz-session from the sofa in which I was rewarded with a candy-corn which I traded for a magnet. There's never a dull moment with Munzee, you know.

I considered re-sitting the walrus test before I went to work but thought better of doing so.  Last night I signed up to the walrus survey that I mentioned yesterday... and got the thumbs-down. The nice people from the WWF presented me with twenty aerial photos of various beaches and I had to say if there were walruses present. It turns out I can't tell the difference between a walrus, an oil-drum and a rock. Oh well... their loss.

I set off to work rather early this morning. Bearing in mind that I had to be in Pembury at quarter to eight and that the journey home took over an hour and a half yesterday I left home just after six o'clock and did the trip in less than an hour.

As I drove the pundits on the radio were talking their normal doom and gloom. Shortages of GPs, shortages of lorry drivers, shortages of abattoir workers, shortages of pretty much everything that used to be done by all the immigrant workers who have all now gone home. Did no one see this coming?

I also rolled my eyes when it was announced that at least forty-three thousand people may have been wrongly given a negative COVID test result. The UK Health Security Agency said this as they also announced the suspension of operations at a privately run lab in Wolverhampton. On the one hand I had to spend years qualifying to do what I do, and have to keep my skills up to date, and can get sacked if I make a mistake. On the other hand anyone can just set up a private lab and off they go? Am I missing something here?

Whilst at work today I saw that the Trust has won an award: "Public Sector Employer of the Year". That's good. I must admit I've been far happier here than I was under my last employer who were in the news today facing allegations that the deaths of babies were connected with staff being forced to work up to twenty-hour shifts. With two hundred families giving evidence the the formal enquiry, you have to wonder what went wrong. I suppose the place never really recovered from the debacles of Rodney Ledward or Clifford Ayling.

I did my bit at work; for some reason the Ivor Biggun song "My Grandfather's Frock" was stuck in my head today. I have no idea why...

At tea  break a colleague told me of the sad death of someone with whom I used to work. I say "sad death" - I can't pretend to be distraught. I worked with the chap on a few occasions during the late 1990s when seconded to the Buckland Hospital in Dover from time to time, and since that time the chap made no effort to keep in touch whatsoever. In fact when I had my "little episode" ten years ago when I really did find out who my friends were, this chap was one of the vast majority of people who kept their distance.

Doing the early shift made for an early finish. With nothing much on the radio I sang along to my Ivor Biggun CDs as I drove home. I decided against going to B&Q for felt for the shed roof; instead I came home, and as “er indoors TM” took the dogs on her Munzee mission I set about some ironing. It don’t iron itself, you know…