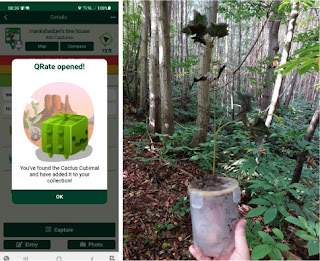 I must admit to being rather disappointed when I turned on my lap-top this morning and peered into the Internet. Several people had clicked the “like” button on the photos I’d posted yesterday, and I had two emails. And that was it. “er indoors TM” ‘s phone had been buzzing and rattling with notifications all night long. She either is far more popular than me or has subscribed to far more notification alerts.

I did see that the Chinese are thinking about making a space station ten times the size of the ISS. That will be interesting to see. I also saw the teaser trailer for the third season of Netflix’s re-make of “Lost In Space”. I can remember the first season being good and the second not so good but can’t remember any of the specifics. Perhaps I should re-watch them before trying the new stuff.

I then launched my latest e-project; a guide to Wherigo; a rather obscure branch of geocaching with which pretty much everyone gives up before they even try.

Pausing only briefly to capture a cactus cubimal (it’s a Munzee thing) I popped up the road to the shop to get a sandwich for later and some pastries for lunch. I was glad that I did as I found my car was parked near the shop and not two streets away in the other direction where I remembered leaving it.

We got the dogs on to their leads and drove out to the Warren (Munzing like a thing possessed) where we met “My Boy TM” and Cheryl. We walked into the depths of the woods to investigate a pond and a huge shed-thingy that they had found on a previous walk. I rather suspected that what they had found was actually someone’s garden; the giveaway being his comment that you had to climb over a fence to get to the place. In the meantime whoever’s garden it was had fixed their fence, which was probably for the best all round.

But we had a good walk through the Warren and out the back into Hoad’s Wood. Whilst we were there we had a little look for a geocache which had previously eluded us (on 29 November 2020). After quite a bit of looking in totally the wrong places we found the thing.

We made our way back to the cars, some along footpaths, some through the muddy streams (it’s a dog thing) and came home where I got out the shears and gave myself a quick haircut before scoffing pastries for lunch and taking myself off to bed for the afternoon.

I didn’t really sleep very well, and gave up trying to sleep after a couple of hours. I got up and wrote up some CPD (about which I was rather scathing).

“er indoors TM” is boiling up dinner then I’m off to the night shift. I wasn’t originally down to be working tonight but the need arose, and working tonight means I don’t have to work tomorrow. Let’s hope I don’t regret volunteering…
Posted by Manky Badger at 5:49 pm