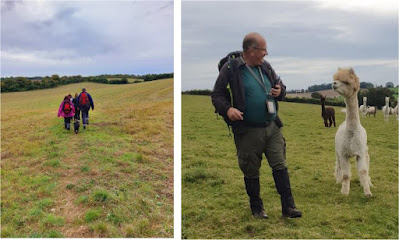 Over brekkie I peered into the depths of the internet and saw that someone with whom I used to work was having a birthday today. I’ve not seen the chap for years, but ten years ago when I needed a friend he stood up when many others didn’t. He’s an interesting chap and I’ve often wondered about his lifestyle. Twenty years ago we were both of equal grades (and therefore equally paid). I lived in a terraced house in central Ashford; he lived in a palatial detached almost-mansion overlooking the sea. At the time I drove round in a rather knackered third-hand Austin Maestro (which eventually quite literally blew up) while he sped about in a little sports car which  am reliably informed cost about four times our annual salary. He was part of the Worshipful Company of Something-Or-Others who had the right (and used it) to drive sheep over London Bridge once a year, whilst I was a cub scout leader and would periodically shiver in a tent.

How did he live like he did? Were the fruits of my loin *really* that expensive? Did he just run up massive bills?

He’s not the only person I know who seems to lead the champagne lifestyle on a brown ale income either. I’ve often wondered where I went wrong in life… I suspect I’ve left it a little too late to find out.

This morning’s Facebook squabble really was one that you really couldn’t make up. When poor Sid’s time was up earlier in the year we contacted Cherry Tree Gentle Farewells and their vet came to our house and helped Sid pass peacefully. Their service was caring, and professional and I would recommend them whole-heartedly.

A couple of days ago Supervet (off the telly)’s dog died. This was mentioned on Facebook and the vet from Cherry Tree posted a message of condolence. Some rather stupid woman immediately accused the Cherry Tree vet of using the dog’s death to drum up trade and wrote a rather nasty review of Cheery Tree on the Facebook review site. And then it all kicked off.

I then had a little fight with GSAK (as one does from time to time). GSAK (geocaching Swiss army knife) is a rather useful bit of software for people who like rummaging in the undergrowth hunting for hidden Tupperware. This morning I gave it the longitude and latitude of where we intended to park the car for today’s walk and told it to get the information of the thousand closest geocaches. Bearing in mind that we were parking (at the top of the M20) at cache #1 of a series of twenty-five, asking it to find a thousand should have meant it would have got all the caches I needed for the day. It was as well that I checked. Out of the twenty-five caches I actually wanted to know about it had found out about seventeen of them. It hadn’t bothered with remaining eight, but had got information on geocaches in central London and Maidstone.

On the third attempt it finally did what I had asked of it.

With “Hannah” (my GPS) finally programmed for the day we loaded our luggage and the hounds into the car and set off. Now that all the fuel stupidity is over we dared to drive a little way today, and we went up to Farningham. We’ve walked there before a few times, and the views are rather good.

We met up with Karl, Tracey and Charlotte and we set off on a little stroll. We started off walking along a the side of a river where we saw trout swimming. Our route took us through fields where we saw horses and ostriches. We went along lanes and crossed over the motorway (I got photos of the bridge from as we drove under and as we walked over). We could see the Shard and The Toaster and much of the London skyline. We walked through a field of alpacas, and one came up to me to say hello.

Our route today was (as always) guided by a series of geocaches. We found all but one of them; the one we didn’t find had a rather incomprehensible field puzzle to solve. But I did think that the given co-ordinates of the ones we found were a bit off. Were they *really* awry, or was the problem with my GPS? The on/off switch seems to have worn through and needs fixing.

I’ll see if I can find a contact for Garmin…

As we walked I found a plastic coin-thingy in in one of the caches. It had a hashtag on it - #suffolksickle24. It said to log it on Instagram (I think) but the inscriptions weren’t very clear. So I logged it in my second-ever post to Instagram. You can follow me on Instagram if you want. One hundred and seventeen people do; I don’t know why as I don’t post anything over there.

As always I took a few photos today and they are on Facebook. I post stuff there because… because I always have done. I’ll stick with Facebook for now I think.

“er indoors TM” boiled up a rather good bit of dinner which we scoffed whilst watching telly. We watched the first episode of Prue’s Great Garden Plot in which Prue Leith and her husband showed off to us mere mortals what a wonderful house they’ve just had built for themselves in the Cotswolds; having sold her old house for a mere ten million quid. I’d been looking forward to watching this show as I’ve always liked seeing her on “Bake Off” but I wish I’d not watched it. I rather resent her now…