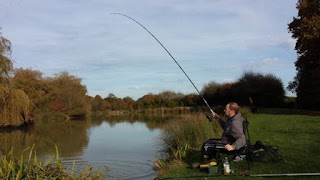 I was again up rather earlier than I might have been; over brekkie I did more of this week’s course on dog psychology. Today we were talking about experimentation – actually watching dogs to learn from them. As I learned and strained my brain my dog was fast asleep and gently snoring. I learned quite a bit from him this morning.

I loaded my fishing tackle into the car and set off to collect "My Boy TM". I had a shock when I got to his house. Lacey was having dress-up at school for Hallowe’en and she was going as Little Dead Riding Hood. It put the wind up me!
We left the girls and drove round to Angling Direct for some maggots. After five minutes waiting we realised they opened at nine o’clock. Not eight. Woops. But it was only a twenty minute detour to Invicta Angling, and soon we were at Shirkoak Lake.

The first fruit of my loin was soon fishing like a thing possessed. I thought I’d use my new rigs and unfamiliarity with them did slow me somewhat. In fact the fish score was 4:0 to Dan before I’d even got my bait wet. But when I did…
My new rigs and baits were wonderful; I had a rather large carp within seconds of casting out.
We had a rather good day; with six species of fish each (and so a draw) we both lost count of the fish we’d caught. I must have had twenty big enough to need the landing net including a personal best roach.

There is a lot to be said for fishing during the week; all the normal people are at work. There was only one other person fishing today, and he was on the other side of the lake. With an island in the way we couldn’t see him; we effectively had the lake to ourselves.
I took a few photos whilst we were fishing. I did have this plan to make a movie but forgot to do so. Next time…
It would have been good to have stayed longer but with the clocks having gone back it gets cold and dark earlier, so we went home. I quickly got changed and put my fish-slimed trousers through the washing machine before "er indoors TM" could lay an egg.

I then took "Furry Face TM" for a walk. We went via the vets; he was overdue for boosters. He was overdue because the vet had stuffed up. Whilst their veterinary care is excellent, their record keeping does leave much to be desired.
Taking him to the vets is odd. We walk past at least once a week. We go in and sit in the waiting area to get him used to the vets. Never a problem… except when he has an appointment to see the vet. He *knows* and he flatly refuses to go into the building, and once there he cowers in terror under the seats.

Today’s visit went well. He’s put on weight – he’s nearly eleven kilogrammes. He has no fleas (I knew that) and his teeth are in excellent condition. He has a wonky kneecap and his back is still not right, but all things considered he’s probably in better condition than I am.
I decided not to tell the vet about dog psychology.

We took a rather circuitous walk home past the railway station, and once home I put "er indoors TM" pumpkin outside. Last year I was very disappointed not to get a single Trick or Treater; no one told me that a pumpkin outside the house is the sign that they are welcome. But now I know.
We had loads of visits this evening; all small children (supervised by mums), all wonderfully dressed up. "er indoors TM" had left a tub of lollipops in the kitchen which I guessed were for the Trick or Treaters. The tub was empty by the time she came home from work so I started handing out the cakes that we don’t like. "er indoors TM" came home and pointed out that those cakes went past their sell by date over a year ago. Oh dear…