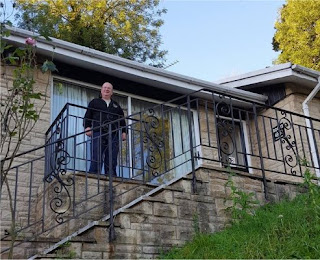 Another poor night’s sleep. I gave up trying to sleep shortly before 7am and sat looking at the beautiful view from our chalet’s patio doors for a while as I guzzled a cup of coffee. All the time trying to be quiet so as not to wake "er indoors TM" and all the time being rather conscious of the fact that I was crashing around much like "My Boy TM" used to when he was in “stealth mode”.
She is very much an “owl”; up for most of the night. On the other hand I’m a “lark”; wide awake at dawn.

With coffee guzzled I had a look-see at what was going on in the world via the window of my lap-top. I struggled a little – the free wi-fi at the Shillingford Bridge hotel was a little flaky.
LinkedIn suggested I might congratulate Matthew Churchill on the anniversary of having worked in the same place for four years. I didn’t feel confident to do so. Not only do I not know where he works, I have no idea who he is either.
I then had another look at a message from the astro club committee. It has been suggested we approach an astronaut to come to give a talk to the club. One of the British astronauts was suggested, I won’t name her (that should give it away!) Although I’m not treasurer any more, I know how much money the club has. Whilst we’re not poor, we are hardly rich either. We could afford to pay reasonable expenses, and a night in a local hotel. The astronaut we approached had a manager who does all her bookings for her. Her fee would be ten thousand pounds. Ten thousand!!! Admittedly the fee is halved for “educational bookings” but even so she’d only have to get off her arse three times a year to live better than I do.
Don’t get me wrong; I’m not implying she’s doing anything wrong. But there is no denying that I’d like to command such a fee. I know I could charge it; I doubt anyone would pay it though.
I wonder how many times this astronaut does got booked to give talks?
I also had an email telling me that exotic and refined Asian women were hot for me, which was nice. Whilst they too charged for their services I suspect they came in somewhat cheaper than ten thousand pounds.
As I tried to surf the net the chap in the next chalet walked past our window carrying a toilet seat. I did wonder if it was his own, or if it was the hotel’s which he was taking to reception to make a complaint, but I didn’t like to ask.

By the time "er indoors TM" emerged from her pit I was going stir-crazy. We went down for brekkie; the swingers’ coach was still in the car park but I hoped we were late enough to have missed them. However we didn’t miss “Mr Beard”. “Mr Beard” had a beard that was probably almost (but not quite) as large as his head. It was so immense that at every mouthful he was having to open his mouth to its utmost extent (like a young bird in its nest) to get food through the beard and into his mouth.
I watched for a few minutes then ate far too much brekkie.

We packed our bags and checked out of the hotel. I quite liked the Shillingford Bridge hotel – I’d certainly go back there again. I particularly liked the balcony; even if there was a marked shortage of peasants at which I might flick peanuts.

We made our way home along a rather circuitous route (for geo-jasmer purposes) but was at "My Boy TM"’s house before 4pm. We collected a rather excited "Furry Face TM" and pausing only briefly to unload the car we took him round the park for a walk.

And then an evening in front of my own telly. Big Bang Theory, Bake-off, Red Dwarf, Gogglebox… we had a good holiday, but it is good to be home…