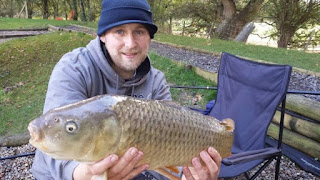 I slept like a log – amazing how a couple of night shifts do that. Over brekkie I watched an episode of “Dad’s Army” in which our heroes were masquerading as cutthroats and desperadoes (as they do). One of the better episodes, but it did rather fizzle out towards the end.
I then had a quick look-see on-line. Apparently sexy Russian brides are waiting for me. I wonder why. I hope they aren’t expecting much of me; they will be in for a disappointment.

I drove round to collect "My Boy TM". We took Lacey to school, then drove on to Rocky’s café for a spot of brekkie. Then it was only a short hop to Charlie’s Lakes. We’d thought about where to go fishing and decided to give Charlie’s Lakes a go. "My Boy TM" had been lucky there last week.
We had a really good day’s fishing. Loads of tiddlers on the float rods, and once I’d been taught how to “blob up my tag end” I was very successful with my quiver-tip (!) I had six fish big enough to need the landing net. Mind you "My Boy TM" had over a dozen needing the net including one that was almost too big for the net which was certainly twice (if not more) as heavy as anything I caught.
However before we’d started the first fruit of my loin had decided how success would be measured. It would be on species of fish caught. Throughout the day he caught roach, perch and common carp. I caught all of those and rudd, mirror carp and a catfish too. So I won. Happy dance.
We would have stayed longer, but it was getting dark and we thought we should call it a day when we realised that our hands were too cold to feel to put maggots on the hooks.

Having received orders we came home via the shops. I took "My Boy TM" home, then came home to a very shouty dog. I took him for a quick walk, then spent a couple of minutes on the lap-top. I took several photos while we fished, and thought I would share them with the world. I do that. Whilst I suspect the world wasn’t overly fussed about fishing I know my mum likes to see that sort of thing.

We scoffed tea, then set off to Folkestone where the clans gathered. ChromeCast games were followed by a rather good dose of Star Trek, then we came home for cake and custard.
I’m off to bed now – I think I caught the sun earlier…