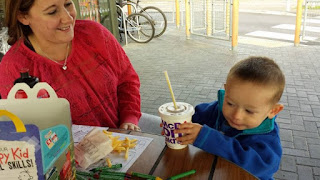 Despite a rather late night last night I was wide awake by 6am this morning. Perhaps I might blame a fidgety dog, but an inability to breathe despite a CPAP device blowing a hurricane up my nose is probably closer to the truth.
I got up and messaged "Daddy’s Little Angel TM" to see if she fancied taking the dogs for a walk this morning, then set the washing machine loose on more laundry before devouring my morning toast.
I had an hour or so until "Daddy’s Little Angel TM" would be ready, so I spent a little while working on my next little project. I’ve decided to write a little guide to geocaching; if only to give me something to keep me out of mischief.

After a while I got dressed and we went for our walk. On the way to meet the most recent fruit of my loins I nearly had an altercation in the vets. I’d had a text message to tell me "Furry Face TM"’s flea treatment was due. So we went to the vets. A rather scary-looking thug (with an indeterminate animal in a basket) was trying to make an appointment. But rather than telling them what dates he could do he insisted the receptionist choose a date and he would then find out (using his phone) whether he could do that date. It would have made far more sense for him to say what dates he could do; and it was painfully obvious he couldn’t operate his phone. The receptionist was suggesting a date, and he would struggle with his phone for seemingly ages before he would say that date wouldn’t suit. After fifteen minutes they were into early November. I lost patience and walked out. The thug shouted after me asking if I had a problem. I turned and told him I did have a problem, and that I would come back later when he had sorted his problem out. It was like watching a balloon deflate; clearly this thug had never had anyone stand up to him before.

We met "Daddy’s Little Angel TM" and "Stormageddon - Bringer of Destruction TM" and walked out to McDonalds for McBreakfast before coming home. Sam had a dentist appointment and "Daddy’s Little Angel TM" had to go with him, so I was on baby-sitting duty.
It was great fun.
We played lego trains, we fed the fish and swept the back yard before playing with the stair gate for half an hour. It was a shame the dentist appointment was over so quickly.

I then took myself off to bed for the afternoon but what with "Stormageddon - Bringer of Destruction TM" prank-calling me from his mother’s phone and "Furry Face TM" declaring “Red Alert” and shouting the house down (for no reason) I didn’t sleep well.
I gave up trying to sleep after a while and spent a little longer on my Guide to Geocaching. I’ve probably spent about six hours on it so far and the instructions haven’t even got us out of the house yet.

I was hoping "er indoors TM" would be home before I left for work; if only to boil up my dinner. I shall get a sandwich from Morrisons,
I’m off to the night shift now…