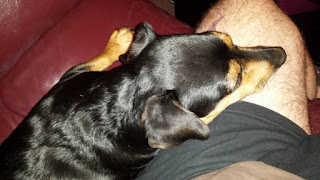 Yesterday I mentioned a discussion I heard on the radio. I said "...it was amazing how the people on the radio could discuss the issues in depth without resorting to insulting anyone who had a different opinion to their own. If only more people could do that."
In the small hours this morning as I worked the radio was playing the "debate" between the two US Presidential candidates Donald Trump and Hilary Clinton. One of them spent the entire time slagging off the other; the other spent the entire time calling the first a liar. Petulant, immature name-calling far beneath the dignity of anyone aspiring to be the President of the USA.  I'm glad I don't have to choose between them.

Again I was very pleased to see the early shift as they turned up at 8am. As I drove home I was saw that the Chartham Scarecrows had returned. There was a notice by them; I really should have stopped and read it.
I drove to the car fix-it shop where "er indoors TM" was waiting for me. She was having her car serviced. On the one had skipping car services is a false economy; on the other it costs money I don’t really have. But what is money for not to squander foolishly.

I drove her to work then came home where "Daddy’s Little Angel TM", "Stormageddon - Bringer of Destruction TM" and "Furry Face TM" were all waiting for me.
We went for a little walk; into town to the e-fags shop, then home via the North park. Other than "Furry Face TM" humping Sid (to the amusement of passers-by) the walk was relatively uneventful.
After the walk I took myself off to bed for a while. I had thought about going walking with friends today (I’d had an invitation) but sleep seemed a more sensible option.

I didn’t sleep for more than a few hours; when I woke I had the horrible feeling of not knowing where I was, what the time was, or even what day of the week it was. I get that after night shifts; it soon passes.
Over a rather late brekkie (3pm) I watched the last episode of the current series of “The Last Ship”. I like the show; however it is a bit “A-Team” in that for all the bullets fly, our heroes always emerge unscathed.
Like many shows it clearly seems to have been kept going far longer than the writers had imagined. Where the first season had a plot, it is now clearly being made up as the writers go along.
Wikipedia says that two more series have been commissioned. I’m looking forward to them.

"er indoors TM" then sent a message. Good news and bad news. One the one hand she’s scrounged a lift to the garage to get her car back (so I didn’t have to go fetch her). On the other hand her car’s steering was knacked to the tune of one hundred quid more than she was expecting. So having squandered money she came home and boiled up a rather good bit of scran and then she went bowling.

With my dog fast asleep on my lap I watched last night’s episode of “Poldark” then had a look at some geo-puzzles. They always keep the mind off sin… Perhaps Ross Poldark might benefit from doing some.