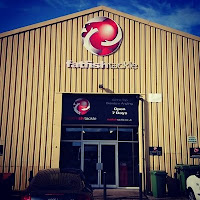 Despite the best efforts of my CPAP machine I was totally breathless and wide awake by 5.30am. I tried to get back to sleep, but that wasn’t going to happen.
Over brekkie I watched the last episode of “National Treasure”; a rather good Channel Four series in which Robbie Coltrane played an aging celebrity accused of sex crimes he had supposedly committed thirty-odd years previously. It was a rather good show; very powerful. Obviously based on the recent stories of Jimmy Savile, Rolf Harris and the like, but it this case although the character was found “Not Guilty” and there was plenty of evidence in the story to show he was innocent of the specific crimes of which he was accused, you still wondered if he was guilty of something else.

I took "Furry Face TM" for a walk round the park. As we walked we met lots of schoolchildren who wanted to fuss him, and several other dog walkers who knew Fudge by name even though I don’t remember ever having met them. AS we started the walk I noticed a rather spectacular rainbow. I always thought rainbows came *after* the rain, so I was rather surprised when the heavy rain then hit.
We were rather damp by the time we got home.
We came home and dried off and I spent a few minutes having a look-see on-line before setting off to work and the late shift.

I stopped off in Chartham on my way to work. not one hundred yards away from the pond shop is a fishing tackle shop. Yesterday I was whinging to "My Boy TM" about how there are no fishing tackle shops placed conveniently for me and how getting any tackle involves driving considerably out of my way. It turns out that every time I drive to and from work I drive right past Fat Fish Tackle. It is amazing what you miss when you don't pay attention. I popped in and the chap there took quite a bit of time to show me all about hair rigs.  I spent twenty-five quid with him.
I stopped off in Morrisons for an apple and a banana and bog roll, then went on to the cheapo-bargain shop because the sweeties are cheaper.

As I drove I listened to the radio. there was a long interview with a British chap who teaches at an American university where the law regarding guns has recently changed.
Students can now bring (lethal) hand-guns to lectutres and the University staff are not allowed to even ask if they've got a gun, let alone ask them not to bring it into the lecture hall. One student being interviewed said it was a good move because if there are any bad people in the University then he (as a good person) could defend the public... by blowing away anyone he perceived to be a bad person.
You have to admire the American right to carry arms...

And so to work… and as is so often the case on the late shifts my day was effectively over by 11.3am
Posted by Manky Badger at 11:31 pm