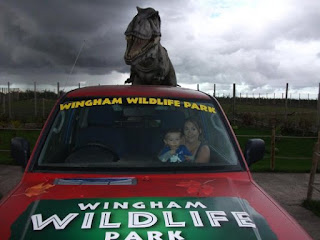 The noise of the rain woke me in the small hours, and I then la in pain for an hour or so desperately trying to hold off getting up for the loo. I finally gave up at 5am, then went back to bed and slept for two hours. I say “slept”; “nightmared” might have been a better description. I seem to have so many vivid dreams these days. Perhaps I’m going a bit madder than usual?

Over brekkie I spent a few minutes on the astro club’s website. It needs tweaking from time to time. And with that tweaked we drove round to collect "Daddy’s Little Angel TM" and "Stormageddon - Bringer of Destruction TM" and we then made our way out to Wingham Wildlife Park where we met the rest of our party. Eight bigguns and two littluns had a rather good wander round. We started off with the big turtles (otters), pink ducks (flamingos) and dogs with hats (stags) and moved on looking at crocingdiles, pontipines and ra-ras. (It is just possible that my smallest grandchild could improve his large vertebrate recognition skills)
They had a rather good dinosaur exhibition; it terrified "Stormageddon - Bringer of Destruction TM". We had to leave it. Mind you the nice lady giving talks about the big cats was really good. And I did laugh when a passing peacock stole one of our group’s sandwiches out of her hand.
I was especially impressed with the new chimpanzee enclosure. The chimps haven’t arrived yet, but their enclosure is probably the best animal enclosure I’ve ever seen in any zoo. I want to go back to see it when the chimps have arrived.

The weather was against us; it was exactly as it had been forecast. Heavy rain showers all day. The weather would go from sunshine to torrential rain and back again within minutes. But we made the most of it.
I took several photos whilst we were at the zoo. If any of my loyal readers are looking for a day out I can thoroughly recommend Wingham Wildlife Park. We were there for five hours today and didn’t see all of the animals.

We went back to "Daddy’s Little Angel TM"’s flat where the littlun’s birthday presents were unwrapped (and I had a little sleep). We had beans on toast for dinner, then "er indoors TM" went off to the Saturday film night. I was tempted to go along, but I would only sleep through whatever film was being shown, so I slept in front of my own telly instead…