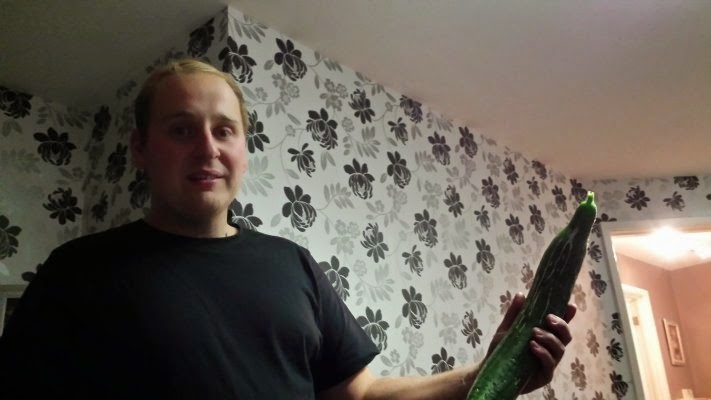 After a better night's sleep I watched "Revolution". In today's episode everyone kept their kit on; which was probably for the best. Mind you in this morning's show it was rather obvious that the leading bimbo was wearing make-up. Bearing in mind that the basic premise of the show is that they are living in a post-apocalyptic world with no electricity and in which modern society has collapsed, and that our heroes are on the run; where does she get a regular supply of slap and lippy?
"Furry Face TM" was hoping for toast; he was unlucky today. Mind you he did seem subdued this mornning. There was a dog barking down the street at 6am. We could both hear it, and for some reason the sound seemed to upset my dog. Perhaps he knew it was wrong and thought he might get the blame?

Off to work. The Prime Minister would seem to be "Mr Popular" at the moment on the radio's news; despite having had his private conversations spread all over the news he still seems to be riding high after the victory over the Scottish Independance-ists last week. Meanwhile Ed Milliband tried to be clever by giving a speech "off the cuff" and forgot to mention the most burning issues of the day.
Mind you, does anyone really have any interest in the antics of the Prime Minister and the Leader of tthe Opposition? To quote Hanna Toms (Labour's Prospective Parliamentary Candidate for Truro and Falmouth)
talking about the deficit "For most people, they don't understand what it [the deficit] is anyway" and in all honestly I think she might be right. not only about the deficit but on a much wider scale. I suspect few people have any real grasp of the country's political situation. Least of all the Prime Minister and the Leader of tthe Opposition.

I did my bit at work, and came home again. I took "Furry Face TM" round the park for a rather uneventful walk, and once home I struggled to get our old mattress into the back of my car. I've been trying to get rid of it for some time; we finally found someone who wanted a mattress, but had no transport. So I drove the thing to Arlington.
Whilst we were in the area we delivered birthday stuff to "My Boy TM" who will be twenty seven tomorrow, and then helped him eat turkey steaks and beef burgers and veg from his garden. Very tasty. Especially his home grown chili which gave me hiccups.

We were home rather later than expected; Dara O'Briain was spouting drivel on the telly, aand my dog was farting. Perhaps I should have stayed with "My Boy TM" and his various vegetables...