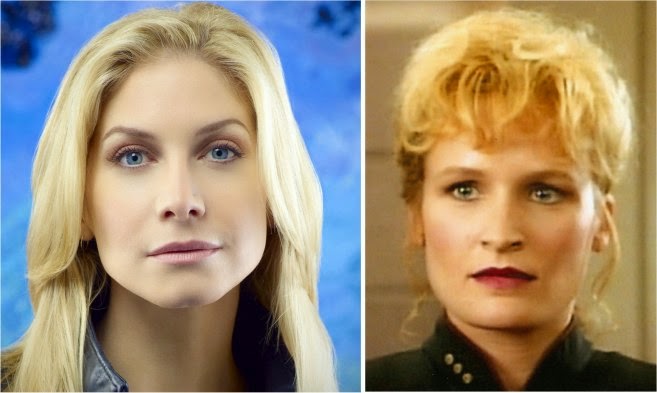 Over brekkie I watched the first episode of “Revolution”. It was among the freebies on the SkyPlus box; I’d heard good reports about the show. This first episode seemed OK; mind you I’ve always liked post-apocalyptic fiction. One of the leading actresses seemed familiar. I thought I’d seen her on “Star Trek”; she’d actually been on “Lost”. Either way... I would (!)

I then took "Furry Face TM" round the park to test out Wherigo Mk II. It worked well; completely according to plan. Whilst we were out we met another “plum”. What is it with me? - Do I have an idiot magnet? Sometimes it seems so. This bloke was walking his dog. I say “dog”; the animal was at least three-quarters rhinoceros. I suppose I have seen chunkier animals; just not chunkier dogs. It wasn't especially big, or fat, just epically chunky. The dog's owner started shrieking when Fudge and the "rhino" approached each other. He had fits when they started playing nicely. I *really* couldn't see what his problem was, so I smiled sweetly and left him to his hysteria.

Once home I did the geo-admin for my new Wherigo, and then I set off to work. Over brekkie I had noticed that a new geocache had gone live on my way to work. I didn't fancy setting off to work four hours early, and I had thought I might pick it up on my way in to work. So I went to work via Challock, and after a little walk I was rather surprised to find that no one else had already been for this cache yet. I was First to Find. Happy dance.
I would have done a little Ingressing in Challock had there been any EE Internet signal. Yet again "Everything Everywhere" is demonstrably "Nothing In Most Places". I really should complain again

As it was on my way I popped in to the pet shop. "Furry Face TM" is getting very fussy about what he will and will not eat, so I've bought some different dog foods. I've found that if I mix two foods he doesn't like, he often scoffs them up in combination.
Mind you for a dog which doesn't eat very much he is becoming remarkably rotund.
I also checked on a geocache I'd hidden by the pet shop some time ago. I'd had a few messages to say the thing needed a little attention. I had a look-see. It seemed fine to me.

Work was work, and at lunch time I blasted away in the works car park on my saxophone. I didn't realise that a colleague has mucking about in her car nearby. After lunch break she was rather complementary, and actually identified the tunes I had been strangling. I was quite pleased about that...