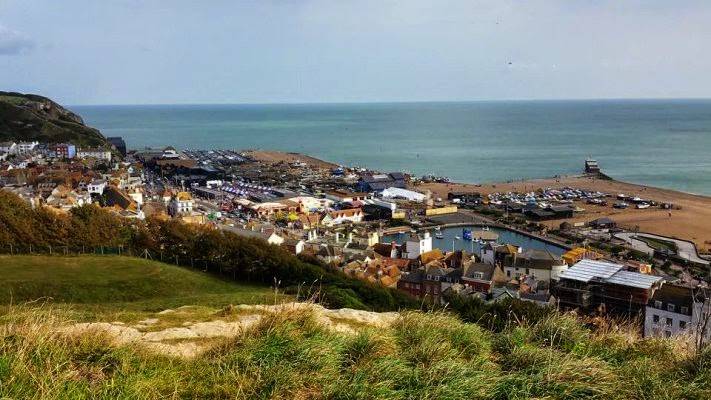 After a good night's sleep I was raring to go. No one else seemed raring, so I wasted an hour or so checking out Facebook and emails and the like. There wasn't really a lot going on in the world.
I had a mooch through my Facebook friends list. I saw I've been de-friended by someone with whom I thought I was on reasonably good terms. I wonder what I did to give offence there? In years gone by I *really* did try to be everyone's best buddy. Now I've come to conclude that this simply isn't possible. Oh well, one person don't like me... over four hundred people are still on the friends list.

We collected "My Boy TM" and his entourage and we set off to Hastings. First of all to visit various relatives. And with relatives visited we had a little picnic on the West Hill. It was a shame that passing dog-walkers didn't have the common sense (or decency) to drag their dogs away from the picnic. I honestly think that one epically fat dog-walker thought that we were there to feed her dog.
Despite scrounging dogs we enjoyed our picnic, and then whilst everyone else went into St Clements Caves I took "Furry Face TM" for a little walk (as dogs aren't allowed in the caves). Me and Fudge had a little geo-stroll. I must admit that I was disappointed to only find two out of five caches. One of the three I didn't get was broken, and two would seem (from the logs) to have been missing for some time. Perhaps I was being rather cynical when I whinged that it would seem that geo-maintenance isn't something that goes on much on the West Hill in Hastings.

With the caves visited I met up with those who had gone underground and we then had a quick five minutes in the play park. We might have given it longer, but the sky was black. So we visited more relatives, and I wound up my grand daughter.
Sums.
Twenty seven plus nuffink equals nine. Lacey didn't agree, and tried it on her caclulator. She got a different result to me, but I used my brain to think (ouch!) and so I am confident that twenty seven plus nuffink equals nine.

Once home "er indoors TM" set off bowling. I treated myself to KFC, watched another episode of "Revolution" and realised the spell-checker in OpenOffice would seem to have died. Apologies if this doesn't read quite as well as it might do. I then organised a provisional geo-stroll for next Sunday; if any of my loyal readers fancy hunting tupperware and haven't seen the event advertised elsewhere, drop me a line for details.