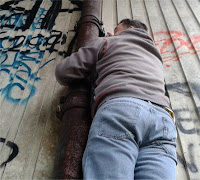 Last night I slept a lot better than I usually do. Perhaps staying up till 2am had something to do with it? After a quick belt of brekkie I popped up to the town centre quickly. There were cheques to pay into the bank. And I wanted to have a look in the pound store.

None of that took very long, and I was soon back home. My plan had been to attack the laundry, but with the washing machine being bust I had to forego that pleasure. Instead I spent a few minutes doing my homework, and I then had a look at the monthly accounts. Could be better – could be a lot worse. And then I booked my car in for a service. That will make the accounts look a whole lot worse.

Steve called, and we got Fudge’s lead on him and drove round to South Willesborough. There was one (relatively) easy geocache to be found, one requiring a ladder to be got at, and one that someone (!) had deliberately thrown into a river to hide it. We found the lot, and I was able to do some maintenance on the one I’d hoiked in the river last week. Only one load of people have logged finding the thing (experienced cachers all) but the cache was in need of some serious maintenance.
We then went round to another relatively newly hidden cache. I won’t say that I wish we hadn’t, but we did nearly break our necks in the mud, we did nearly fall face first into the abundant dog dung that was everywhere, and the location did smell (really strongly) of tiddle.

On the way home we again failed to find the cache by the motorway, and leaving the car at home we took Furry Face round the park for a walk. Steve found half a dozen more caches whilst we were wandering.

By now batteries were flat and we were rather cold so we said our goodbyes. Furry Face has come to learn that after a good walk in the mud comes a bath, and I spent five minutes chasing him round the house before I was able to corner him.
And with "er indoors TM" off our with her mates, me and my dog had a rummage in the kitchen. We found chocolate sponge and fresh cream and ate far too much of it. I'm not sure that fresh cream is good for small dogs, but a little treat every so often won't hurt him...