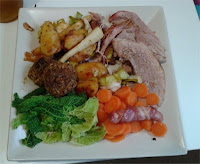 Being Mothers Day one would be forgiven for thinking we might have a leisurely start. No such luck. Off by 9am and so to Sittingbourne. The local geocachers had organised a day of do-gooding. Planting trees and building hedgerows and clearing thickets on an old land-fill site which is being reclaimed into a country park.
It could have been such a productive day...

Over sixty of us turned out for a 10am start. I began to suspect the worst when the warden was like a stuck record expressing his surprise at the turn out whilst the organising were like a stuck record with "I told you so". Attendees had said that they were coming over a month ago.
We shivered through a ridiculously long winded health and safety introduction in which (amongst other irrelevant drivel) we were told what action was to be taken in the event that we should fall into a pond or see a dog, and in retrospect it was at that point that I should have given up and gone home...

Sixty-odd of us went on to start the tree planting: a job which probably would have been better done by ten at most. Sixty-odd of us got in each other's way. With the job done in half an hour the warden then expressed surprise at how well we'd done, and then he went off on the next phase of the operation - knocking in uprights for a fence. Only three could really help with this job, and three were chosen.
Everyone else stood about whilst the warden set about clearing a thicket to get the raw materials to make a dead hedge. A shame that there was no announcement to this effect. I only found out that thicket clearing was going on by accident. Had an announcement been made then two thirds of the assembled throng might not have disappeared at this point.
Within an hour of sixty-odd willing volunteers turning up we were left with less than twenty. Twenty who were cold and dispirited. The rain slowly gave way to hail. And when the message came through to our thicket that everyone else had gone caching I very nearly went home there and then.

So much could have been achieved. Had the warden taken two minutes to organise the troops into teams and to assign jobs then we would have known what we were doing, and we could have done so much. Instead we had anarchy. I feel sorry for the organisers who had persuaded so many people to turn out on such a cold wet day only to have their time wasted.
Any future events like this will have to be organised better. I came along thinking that I could sort out such an event locally. I came away determined I would not want anything to do with such as this.
And to add insult to injury when we left at 1.30pm (we were the second to last car left in the car park) we were locked in and had to wait twenty minutes for the warden to be found to unlock the gate.

Home, and then round to visit the first fruit of my loin. Being Mothers Day he'd asked us round to dinner. Roast pork. Very tasty. Crackling - I chipped a tooth... But that can be fixed. After a cold wet afternoon it was good to be in the warm with family. Must do that more often...