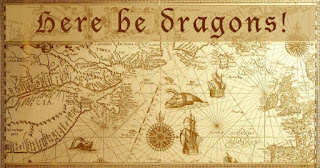 It's my habit to play "Draw Something" on my phone just before I go to sleep every night. The game needs an active internet connection. Last night I forgot to turn that connection off on my phone. I was woken at 3am by my phone shouting "Oh my God - You've got Mail!" because someone had sent me an email about penis extensions. Oh how I laughed.

After a swift Babylon 5 DVD I set off to work. The morning's news had something noteworthy for a change. There is to be a manned mission to Mars in five years time. Well, not so much "to Mars" as "swinging past Mars". It's going to be funded by the American billionaire who was the first space tourist. He plans to send a manned capsule to Mars, and use Martian gravity to slingshot the ship back home again. There won't be a landing, but it's nevertheless a bold venture. I'm looking forward to seeing it.
The organisers are looking for a married pair to volunteer for the journey. I'm game. I wonder if my beloved would be up for it?

I rarely blog about work, but for once I will make an exception. A colleague retired today. We had a little party in honour of the occasion. And something of a cake-a-thon. So much for the diet.
A few years ago I would have looked on in envy as the chap retired. Now... I'm not so sure. If all goes to plan (and it rarely does) I shall be retiring in just under eleven years. But then what will I do? There was an article on the radio a couple of days ago claiming that life expectancy is increasing by five hours every day. This got me thinking so I had a play with a life expectancy calculator
According to that I still have thirty seven years left. That's not bad - I only have to work for thirty percent of the rest of my life.
So after (planned) retirement I will have twenty six years. I wonder what I might do with them?

I did my bit at work and came home again where I spent some time messing about with Facebook maps. The thing seems to be rather hopelessly flawed. From what I can work out the software randomly adds places on to the map based on what it thinks is the name of the location. It guesses this from what you actually write when you are at that location. And sometimes it randomly positions you anywhere on the globe for no reason other than that it can. For example according to Facebook maps I have been to forty two places in Australia, fifty four places in South Africa and thirty nine places in Merseyside. I've never been to any of those places. Furthermore the same mapping facility puts my mothers house somewhere in the west Midlands (She lives on the Sussex coast), and it puts Folkestone Beach in central London.
I wonder how I can turn the maps off...