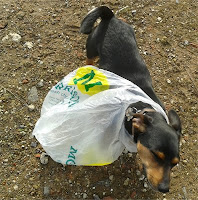 I've come to the conclusion that my insomnia is in some way connected to the need to get up promptly the next morning. So with nothing pressing planned for today, why was I awake before 3am?
Over brekkie I saw a trailer for the new Star Trek film. It looks absolutely dreadful. I do hope I'm wrong. I also saw that the article I submitted for publication yesterday has been accepted. I'm not sure the title is geographically spot on (as Rye is in Sussex), but other than that I'm quite pleased with how it's been turned out.

With my Ham Street Lover indisposed (best not to ask) I was at something of a loose end today. So to begin with I thought I'd do some exploring. A few months ago I found a way to get from South Willesborough to Park Farm going under the bypass. So far I'd only ever walked along as far as a footbridge and then turned off. Today me and Fudge followed the path all the way to the end where it joins a new housing estate. A route which is crying out for a series of geocaches...
Whilst we walked I let Furry Face off the lead. He was fine until he found some fox poo, and whilst rolling in it he got himself tangled in an errant carrier bag. I did laugh. Silly pup.
It was odd that he was ensnared by a Morrisons bag when the nearest branch of Morrisons is fifteen miles away.

We were out walking for a couple of hours. Once home I hosed the fox poo off of the dog and made a start in the garden. Normally I make a point of refusing to do anything in the garden before Easter, but this year I felt I couldn't leave it any longer. I scooped up all the dog poo and flushed it down the chodbin. In several flushes. I've been scurrying dog dung from the garden regularly these last few months and was amazed at how much I'd missed. I then mowed the lawn as it was getting rather long. Just a quick scalping to be getting on with - I'll make it look prettier next time.
Whilst I was mowing Fudge disgraced himself. He was not content with woofing at next door's dogs who were peering over the fence. He started hurling himself at the fence, and actually broke it. I went mental at him - and I could tell he'd understood that he'd been bad. He spent the next hour being incredibly clingy and with his ears right back he looked really sheepish and didn't react to next door's dogs at all fir the rest of the day.
I'm left wondering if he hurls himself at the fence every time when I think he's just outside having a download. Maybe he needs to be supervised when in the garden, or maybe we need to fence off the yard so he can't get further down?

With the gardening done I came in and had a cuppa. And found I had another problem. It would seem that my chodbin wasn't up to the excessive amount of Fudge's fudge I'd attempted to flush and I'd inadvertently blocked it. It was as well I had time on my hands, and I wasted five minutes clearing the toilet. It works now - thank heavens.
And seeing how today was a day's holiday I did ironing.. With ironing done I washed up and hoovered and sorted my smalls.
I must love it...