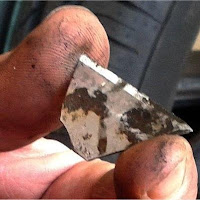 Monday had been a glorious day and the weather forecast had been for more of the same. Tuesday and Wednesday were also bright, but I was indisposed on those days. Thursday was wet and drizzly and I was bored. And this morning I woke to a grey and overcast day with a forecast of heavy rain later. It's a shame we can't choose our weather. It's one subject I have put on a growing list of things I'd like to discuss when I get to meet my maker. (If I'm brave enough)

Despite the grim-looking skies I put Fudge's lead on him and we went for our morning constitutional. We got as far as Singleton Lake before I finally gave in, admitted we were soaked and came home. I towelled Furry Face off, changed out of wet clothes, and took my car for fixing. Yesterday I was advised that new tyres wouldn't go amiss. In the past Road Runners had come up trumps. Today.... I was not impressed. They didn't actually say "F... off Baldy", but there was no disguising that was the sentiment with which I was greeted. So I took my custom elsewhere - to AllSparksTyres. These people seemed to want my custom, and were friendly and welcoming.

We had something of a shock. When they removed the rear wheels we saw that one of the tyres had a Stanley knife blade embedded in it. I can only imagine that this blade got impaled today - surely that would have been seen at yesterday's MOT?
And then home again. With the rain getting heavier I then spent most of the rest of the day catching up with the ironing. As the rain appeared to slack off at 3pm me and Fudge went for another walk. We got soaked as the rain came back with a vengeance, and so we came home again. I resigned myself to finishing the laundry.
Today was a day's holiday -- I always spend holiday days doing laundry?