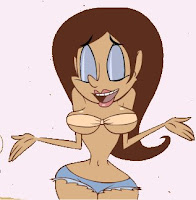 I shouldn't listen to the news in the mornings. All it does is boil my piss. Like this morning's tale of Ms. Josie Cunningham who wasn't happy that the Almighty hadn't blessed her quite as much in the jug department as she might have liked. So she whinged to her doctor who prescribed breast enhancement surgery at a cost of over four thousand pounds to the taxpayer. Apparently not having an epic chest was making her depressed, and was something of an impediment to her ambitions to be a tit model. According to the news pundits she's happy now. And presumably about to flop them out for the delectation of the masses?

I wonder if the NHS might enhance my chopper for free as well?
On a sadder note you can hire people to come and cry at your funeral. For the meagre sum of forty five quid an hour you can pay actors to pretend to be upset about the demise of either yourself or a "Billy-no-mates" relative or friend. They will do their homework and find out about whoever it is that died so they can fool real mourners into thinking that they actually knew the one getting buried. And they will cry real tears so people will think the deceased will actually be missed.
It's a sad sign of our times that people need to be bolstering funerals in this way. I can remember being very embarrassed at a funeral several years ago. Steve, secretary of the snake club, had died. Literally hundreds of us were waiting to go in to the chapel for his funeral; waiting for the preceding funeral to finish. When it did finish it was sad to see there were only four mourners in there. I'd like to think that when my number is up I'll get more than four people along to say goodbye. And if only four can be bothered, then I'd rather it was four who wanted to show up rather than people who'd been paid to turn out.

Yesterday I mentioned that I'd painted the insides of a sandwich box. It was to replace a geocache that I'd hidden which had gone missing. This morning on the way to work I went to put the new cache in place. Disaster - the new box is too big. I shall have to get another box.

And so to work where I did my bit. My legs really ached today. Yesterday whilst in Kings Wood I tried a bit of jogging with Fudge. I thought he might like it. He didn't show much interest, and now I wish I hadn't bothered. And then home again where I fell asleep in front of the telly...