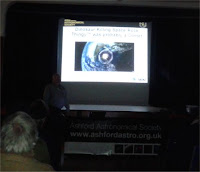 I had rather a late night last night. And then whilst dozing in front of UK Gold one of the programmes featured a child playing a recorder. Fudge immediately woke up and started howling. It was really sweet so with the wonders of Sky-Plus live rewind we played it again and he howled again. The second time we replayed it we recorded him, and you can see him on-line. We played about like this for quite a while and so it was gone 1am before I got to bed.

I slept well for a couple of hours - it was a shame that er indoors TM" woke me when she came to bed at 3.45am, and I couldn't get back to sleep.

I got up just after 7am and looked out of the window. Snow. Not heavy, not laying, but snow. I got out the shears and gave myself a haircut, did my morning ablutions and found that the snow had given way to hail.
Many yeas ago I braved the elements to visit my brother who was fishing on Hastings beach in a monsoon. Soaked to the skin he announced he'd had a "flipping gutful". Only he didn't say "flipping". He said a rude word. Since then the term flipping gutful" has become family parlance for when patience runs thin. I think it's fair to say that I have now had a "flipping gutful" of this weather. Last year on Good Friday we went on a bike ride and a picnic. Today - snow and hail.

After a spot of brekkie I left er indoors TM" and Fudge both asleep and went off to Cheeseman's Green with Lisa. We found a bridge, assessed it as only geocachers can, and then came home again. I popped into the corner shop to see if I could get some hot cross buns. The chap behind the counter had never heard of hot cross buns. I explained that they were a traditional Easter thing. He smiled and said that he'd heard of Easter - it was an English thing (apparently).
Despite the snow we then took Furry Face for a little walk. We went down the road the the second hand furniture shop we'd found the other day. During the week they had one or two bits that might have gone well in the living room. Today they had nothing that suited us, so we came home. Via the bakery for a Belgian bun which made for a nice bit of dinner.

We then took Furry Face round to the park for some geocache maintenance, and then went out for an hour or so with Chippy and Morgan. Having turned them to the dark side we took them on a tour of some of Ashford's more unusual caches. There's nothing quite as much fun as watching someone struggle with a puzzle to which you already know the answer.

Being the last Friday of the month, tonight was astro club. As a committee we'd wondered about having it on a different night this month because of the Bank Holiday, but then that might have been confusing. So we decided to stick with the original plan. We had a surprisingly good turn out. And a good meeting too. The guest speaker was interesting, even if he did seem to jump from topic to topic with little theme in what he was saying.
The general consensus of the club was that this most recent comet has been a flop. But there is still enthusiasm for the next one due in November. I confidently predict that it too will not live up to expectations...