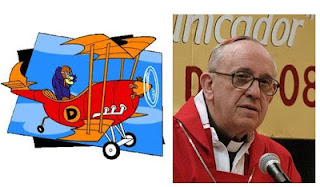 "Daddies Little Angel TM" arrived shortly after brekkie, and we took both dogs for a walk. For the last two days the south east has been in the grip of blizzards and sonw storms. Today was bright sunshine. We had a good walk along the river to South Willesborough and back through Frog's Island. We came back past the Shetland ponies; the word was that these small horses had got loose in the night. They seemed secure in their field, but there was no denying that there was fresh horse dung on the wrong side of the fence.

It would have been good to have walked further, but "Daddies Little Angel TM" was suffering. She's picked up a virus, and so we came home for a warming cuppa. I then spent a little time on the PC. A colleague has recently obtained some very old photographs of her home village in Nigeria and I'd offered to scan them into .jpegs for her. She seemed inordinately grateful when I volunteered a day or so ago. I was only too happy to help. It was easy enough, and was something I could do.

A quick sandwich for lunch and after bandying insults with the Rear Admiral (who had visited) I went to the dentist to get my chipped tooth fixed. As I walked so a hailstorm struck. It didn' last long, but it was vicious for the few minutes that it lasted.
My gob was fixed in less than five minutes and I then spent some time taking up the legs on a pair of trousers: a job I'd been putting off for months. I then did some ironing because no day off is complete without ironing.

And then I got an email. And my piss boiled just a little bit. Regular readers of this drivel might recall that over the last couple of months I'd ranted about how the organisers needed to confirm the event before people could commit to going. In the meantime many of the usual attendees made their own plans, and clearly hardly anyone was going to be along. So I decided to follow suit. With what seemed to be no apparent commitment from the organisers I set about making my own entertainment for that weekend. Today, months too late, an email came through "A decision was reached ... not to fund the June event at Teston.... after presentation of the costings and other factors were taken into consideration".

In retrospect the problem was that two particular people were claiming to be speaking on behalf of the organisers when in fact they were not. However the August event is still on the cards, and I've offered any and all help I can give to the thing.
With June Teston definitely not going ahead I am thinking that Folkestone air show might be a good day out.

Meanwhile we have a new Pope - the Argentinian Francis I. He's seventy-six years old. At the risk of appearing age-ist, is that a good age at which to take on such a demanding job? Still, time will tell. It always does.
I've been quite interested in the recent papal resignation and the appointment of the successor. In the past I've been rather noisy about my agnosticism. Now I'm not quite so sure. I'm (just possibly) beginning to see the logic in Pascal's wager...