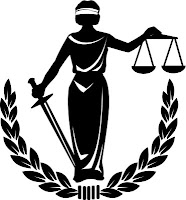 Yesterday was a glorious day. So today it came as something of a shock this morning to find that the car was covered in ice. It soon scraped off though, and I was quickly off on my way to work. As I drove there was an interesting article on the radio by the country's most senior judge. Concerned about the spiralling costs of the legal system he was worried that "court justice" is no longer affordable to the man in the street.
He was concerned that as the legal system prices itself beyond the budget of the average person, then those people still using the legal system will represent themselves. Like I had to. Thereby doing expensive legal practitioners out of a job.
And he was also concerned that people might not even bother with courts any more; preferring to deliver their own brand of rough justice; taking the law into their own hands.
The only surprise here is that it's taken eminent judges so long to realise this.

As I drove through Bilting I had a smile as I drove past a new and gleaming poly tunnel. I felt rather proud and smug about my small part in putting that together. And as I drive to work in the mornings in future I can look over that hedge and feel proud.

I took a little diversion on my way to work. A few months ago I hid a Chinese puzzle box in a geocache. Easy to get to, difficult to open. I'd had a message that someone had been unable to find the cache so this morning I thought I'd have a little look-see to check that all was well. All wasn't well. The thing had gone. Entirely gone. That was five quid down the drain. I shall order a new one, but if that goes then the cache will be reduced in difficulty and replaced with a bog-standard sandwich box. It would be a shame to do this, especially as there are so few caches in the Canterbury area. I can't afford to lose too many puzzle boxes.

And so to work where I did my bit. And then home again. Stopping off at Somerset Road for the weekly gathering. Insults were bandied, and we picked holes in the historical inaccuracies of "Merlin". I can cope with supernatural beings, magic and wizards, but get really riled by the historical inaccuracies such as sixth century soldiers wearing tenth century armour, or lenses being bandied about some three hundred years earlier than when they were actually first invented.

And in closing I shall gloat. Our old friend science has predicted two glorious comets this year. It's no secret that I don't believe a word of it. Comets never live up to the hype. If there is a comet visible to the naked eye this year I shall eat the astro club's raffle.
And guess what - "However, it might be difficult to see the object without binoculars or a telescope. It's going to be in the twilight sky and not as bright as we had originally hoped" says the science correspondent of the Daily Telegraph about the comet which is supposed to be currently lighting up our skies..