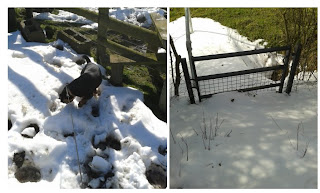 I was woken this morning by my nose being licked. Furry Face had made his way upstairs. Cheeky pup!. After a quick bit of brekkie I got some bits and pieces together and ably (!) assisted by my dog I set off on a geocaching-related mission.


A few days ago someone had mentioned that they couldn't find one of my duck caches. I have set two of these - easy to find, not so easy to retrieve. they are tethered rubber ducks floating in rivers. Someone had said on the Facebook Kent Geocaching group that she couldn't find one of them. I'd explained that the thing should be immediately obvious. She'd said she couldn't see it. So we walked along the river and, sure enough the duck was where it was supposed to be. Floating in the middle of the river.


We then carried on across a ploughed field. And I let Furry Face off of his lead. As we walked we saw snowdrifts. I've blogged this week about how local the recent snow has been, and how I saw very little of it. As we walked today we found snowdrifts. Some a metre deep - and only an hour's walk from home. Fudge seemed to like the snow - he was jumping in and out of the drifts. He was fine being off the lead for quite some time, and suddenly he saw a pheasant. He doesn't like "F-birds" and he set off in pursuit. He saw this bird just as I was about to put him back on the lead as we were getting near some woods. It's always a bad idea letting him off the lead near woods. He shot into the woods, and that was it. By the time I'd got to the woods he had vanished. I could neither hear nor see him. I tried the whistle, I tried shouting for him. Nothing worked. All I could do was search.


After half an hour I thought I could hear a jangling sound. I could - it was coming from a bramble bush. I called Fudge's name and the jangling got louder. The idiot dog had got tangled in brambles and was completely stuck fast. By the time I'd untangled him and got him on the lead I'd completely lost my bearings. Using "follow the arrow" sat-nav I ploughed a straight line through the jungle to the nearest road. Carrying a very sheepish-looking small dog.


I found a rather scenic bridge over a small river. I might go back there with a rubber dingy and hide a cache under it at some point. Soon we were at Sevington, and we were able to start our walk properly. there were a couple of geocaches in Sevington, and half a dozen in Mersham a couple of miles away. I had this plan to put a couple of lines of caches from Sevington to Mersham and back again to make a little series of caches.


And I (and my dog) did just that. It was a bit cold today, and jsut a bit muddy. But it was a bright day and we had a good walk out. By the time we got home we'd been out for over four hours.


Furry Face went straight into the bath. He was filthy, with mud literally up to his ears. Once he was hosed off he settled down and was soon asleep. I checked emails and was fiddling about on-line when the first fruit of my loin came home. He was immediately on my case asking what I'd done to his dog because his dog was obviously knackered. I don't think he approves of my walking Fudge quite as much as I walk him.


After the dog had had a bit of a rest I took him for another walk. I had a plan to see the comet. I've made it known that I don't expect the current talk of a comet to come to anything. The pundits had predicted a bright comet. Now it seems the best we can hope for is something that you might (just possibly) be able to see for half an hour in the twilight. If you have binoculars, know exactly where to look, and if you are very lucky.


We weren't lucky - there was too much cloud cover. So we came home. As we approached home we could hear raised voices. A car and a bus were both refusing to give way, and traffic had built up behind both. Several drivers had got out of their cars and were shouting abuse at anyone they felt needed to be abused. There is never anything as amusing as someone else's petty squabble.


We settled down with a bottle of plonk, some port and cheese and watched "Forrest Gump". For all that he film is a classic, I'd never seen it before. It was really good. I wonder how mnay other things like this I've missed...