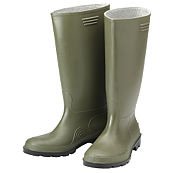 I’d been expecting the most recent fruit of my loin today. She showed up eventually, and we set off walking the pups. As we do. Today we thought we’d try a different route. We usually go through the park, and we find ourselves making polite conversation with the nice Irish chap, trying not to fight with Mr Angry, and trying not to poke fun at "Orange Head and her Little Stocky Chum." (Patent Pending).
Instead we walked up past the station, along the back roads onto Hythe Road, and then totally mistaking right for left went a mile in the wrong direction. Oh how we laughed when we found the motorway rather than Arden Drive.
Whilst we were walking along the paths by the Stour Centre we met up with a gaggle of retired people coming the other way. One of whom waved at me, warmly greeted me, and asked after me. She clearly knew who I was, and knew all about me. I wonder who she was.

Eventually we made our way home, and leaving "Daddies Little Angel TM" to supervise the hounds I popped round to B&Q. My wellies had developed a major leak, and the kitchen light had gone squafty. B&Q had replacement wellies, but didn’t have fluorescent light tubes in the right size. In fact the nice man was under the impression that they don’t make light tubes that thick any more. So I thought I’d try Wickes – the old tube had their name on the side so I’d clearly got it from there. I asked the woman behind the counter if they had the tubes I was after. She clearly couldn’t care less. Fortunately a passing builder knew which tube I needed. I bought the tube on his advice; it would have been rude not to have done so. But I would be very loathe to shop in Wickes again after the attitude I received today.

It was with a sense of relief that I got the new tube into place and found it worked. Feeling I should have a break and a cuppa I was amazed to find it was mid-day, so I made myself a sarnie, and cracked on with some more writing – a review of the geocaching to be had on the Kent-Sussex border. I wonder if this article will be accepted. I hope so - it took long enough to write.

Meanwhile in another plane of reality there has been a budget. The Chancellor of the Exchequer has said he won’t put up fuel prices in September. Whilst I’m pleased about that, realistically he needs to reduce the prices quite substantially. He’s also reduced the price of a pint of beer by a penny. That’s good of him. But all the time I can make the stuff for less than a tenth of the price of what it costs in the pubs, I don’t think he’s winning my vote any day soon.