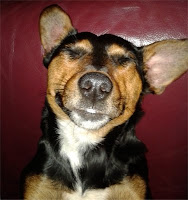 Most Sundays I go on quite a serious walk - walking for several hours and many miles. Yesterday's walk was rather modest in comparison with what I am used to. So why on Earth did I feel so physically drained this morning?
As I scoffed brekkie "Daddies Little Angel TM" arrived, shrieking about "Hedge Suits" and complaining that the shop in her street had been charging her through the arse. It's another world....

We took the dogs out for a walk. Through the park and on to Singleton lake. I had asked the most recent fruit of my loin to come on a geocaching mission, and to my amazement she had agreed. But the area I was planning to search in was really wet and waterlogged, so instead we carried on up to the environment centre and walked across there. As we came in through the back of Singleton we saw an idiot walking his dog. From a distance of fifty yards he shouted that his dog was dangerous and that we were not to follow him. So we changed our direction. On seeing how we were now heading off at right-angles this twit ran with his dog to be in our way and again shouted to warn us off. So, obligingly, we again changed our route only to have this fool again double back on himself and shout at us again. This time I made a point of not answering him, but instead I loudly told the world at large that if any wild dog came near me and mine I would hoof it up the khyber. Surprisingly (or not) this idiot then beat a hasty retreat.

The rest of our walk home was relatively uneventful. Once home we popped round to see a friend who’d mentioned that she had a poker table she didn’t want. I thought it would be a shame for the thing not to be appreciated, so I’d offered it a good home. "Daddies Little Angel TM" and I popped round, fussed the cats, and came home with it. It’s a good table and there are quite a few poker chips with it. A shame Furry Face felt the need to eat some of it, but such is life.
After a quick bit of lunch the Rear Admiral visited. He seemed singularly unimpressed with the poker set. Which was a shame as I had a vague plan of installing the set at the Admiralty. Still, never mind. Instead I set about some laundry. At the weekend I found an old coat that my beloved had forgotten about. She’d asked me to wash it for her as it had collected quite a lot of dust during its months of neglect. Before washing it I emptied the pockets. Amongst the rubbish and clutter in those pockets I found two twenty pound notes. I don’t usually check pocket when I’m doing the washing. I shall from now on.

With "Daddies Little Angel TM" then going off on a mission I took Fudge out on another walk. I’d had a note from the postman to say a parcel was awaiting collection so I went to get it. Furry Face didn’t seem overly keen to go on another walk, and he merely plodded along by my side as we went; not pulling at all. That is quite unlike him. I hope he’s not sickening for something.
With parcel collected I sat down to do some more writing. On Friday I wrote an article about geocaching in Ashford which was received well. I’ve started working on another article about caching elsewhere in the county. Let’s hope that this one will go down as well.

And as "er indoors TM" set off bowling I settled down with a very sleepy dog and I watched more Babylon 5 DVDs. It was a good way to spend the evening...