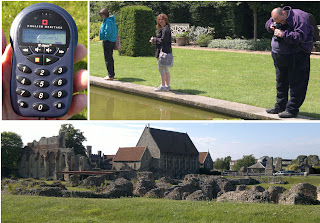 Seeing how the kite festival wasn’t taking place this week, we’d arranged to meet up with Simon & Corinne to make use of our English Heritage membership. Having spent a few minutes feeding the Koi we set off to Walmer Castle. Ostensibly the home of the Lord Warden of the Cinque Ports, the castle was pretty much done up as a shrine to the memory of the Duke of Wellington. The insides were scenic; the outside was raining. But when has rain ever stopped anything in my world?
Having said that, we didn’t get *too* wet, and as we squelched back to the car just as Batty and Clive arrived. We all then drove up to Deal Castle - built by Henry VIII to defend against a French invasion that never happened, and reinforced against a Napoleonic invasion that never happened, the only time the castle saw action was during the Civil War.
We parked up and pic-niced by the beach before going into Deal castle. It was as well we had our lunch at that point: we needed the energy. The audio tour round Walmer Castle had been leisurely; we’d taken our time. We moved from room to room at our own pace. The audio tour at Deal Castle was a tad brisker. In fact not so much a tour as a sprint round.
The tour at Walmer Castle had been arranged so that at each point of interest we typed in the number displayed on the plaque into our gadget and we listened before casually moving on to the next exhibit. The tour at Deal Castle had no numbered plaques; we just pressed go on the gadget, and then charged round the castle as quickly as we could; desperately trying to keep up with the narration.
On the way out, we had a grumble at the nice lady in the shop about the audio tour. She sympathised and told us that the management at Deal Castle had arranged the audio tour in one long rush because they didn’t want numbered plaques all over the place.
Just as we got to the cars to move on to our next port of call, Steve, Natalie and the littluns arrived. Steve then led us to Richborough Fort. Personally I think he took the scenic route, but he got us there which is more than I could have done without sat-nav.
Richborough Fort was the site of the first Roman landing in England in 55 B.C., and unfortunately all that remains are a few walls and ditches. But the nice lady in the shop was friendly and helpful. And once we’d had an ice cream, an excellent audio tour brought the place to life: and this was all the better for being an audio tour done in easy stages and not in one big sprint. This time the audio tour even had a setting for the kiddies.
It has to be said that it was a tad windy at Richborough Fort, but such is life.
Time was pressing on, and over half of our number had things to do, places to be, people to see. But Corinne had found the English Heritage Handbook. St Augustine’s Abbey wasn’t far away, and it was (almost) on the way home. So having said goodbye to seven of our number, the hard-core English Heritagers went on to St Augustine’s Abbey.
St Augustine’s Abbey turned out to be (perhaps) the most interesting place we visited today. The castles had been both built and abandoned within three hundred years, and neither had seen action against their intended protagonist. Richborough Fort had been abandoned fifteen hundred years ago and all that is left is walls, ditches and guesswork.
But the history of St Augustine’s Abbey covered over a thousand years. I’d never been there before: I had no idea the place existed. But it was good. And the audio tour was excellent as well.
And so home via the outlet centre for shoes and T-shirts. Simon and Corinne love the outlet centre, and pop in whenever they opportunity arises. I can see the place from our upstairs window, and I don’t go there from one year to the next.
And so home, where I promptly fell asleep in front of the telly. I was worn out: I’d had such a busy day. An excellent day.  And the photos are on-line here.
And in closing I feel I should make a confession. I have to admit that I was wrong. Back in December when we joined English Heritage I begrudged the cost, feeling it would be a waste of time. But in just seven moths we’ve more than got our money’s worth out of the membership. Today’s outings would have cost us over forty quid in admission tickets were we not English Heritage members.
So there is is – don’t be a daft b*stard; join English Heritage. (Do I get a year’s free membership?)….
Posted by Manky Badger at 9:58 pm