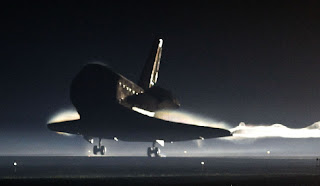 Another late start gave me time to waste on the PC this morning. Completely out of the blue my anti-virus software popped out of the corner of the screen to tell me that it had protected me against several threats recently. It asked if I wanted more information, and so to encourage its efforts I clicked on the “oh go on then” icon. It doesn’t actually seem to have done an awful lot other than having scanned loads of emails and files. I suppose I should be grateful – it’s saved me the effort.
It has however been monitoring over three hundred suspicious processes. One wonders what they are.
As the Space Shuttle now becomes a memory, I was somewhat heartened to see that the US haven’t entirely abandoned manned space flight. NASA still feels it is on course to have a manned landing on Mars within twenty years. I hope so.
I was heartened to see that the last shuttle landing got quite a bit of news coverage. I never cease to be amazed by the ephemeral trivia that passes for “news” in our society. Call up Google News, or Yahoo News, or Reuters, or any news agency. (Go on – do it !!!) How many of the stories featured will have any bearing on the world and humanity-at-large? And how many of the stories featured won’t be utterly forgotten by everyone by next Monday?
The Great Unwashed clamour to find out which D-list-silicon-breasted-celebrity is porking which has-been-footballer. No one cares that the world is fast becoming uninhabitable, or that we as a species are reducing (rather than increasing) our ability to explore the only places we might consider sending life rafts when the time comes..
On a more mundane level I had a browse around eBay. I’ve been looking to get an electronic bite alarm of my own for some time, rather than borrowing one from the first fruit of my loin. However with prices starting from twenty five quid for a cheap one (that’s frankly not worth having), its money I’d rather not squander.
But this morning I found what I was looking for on eBay; and it only cost me £3.63. Let’s hope the thing actually turns up. Mind you, I’ve now bought and sold over five hundred things on eBay over the last ten years. I’m quietly confident it will turn up.
And then after a late finish at work and an astro club committee meeting, we watched the second episode of the new series of “Torchwood”. It’s no secret I’m not a fan of the show. When it first came out I said about it (on 23 October 2006) …” It was OK at best. Will I watch it again? Possibly, if I remember. There was nothing about it that made me want to keep up with it.”
Four years have passed, but I stand by my original comment. This new season is effectively a re-boot but I still remain unimpressed with it.
With any work of fiction once is required to suspend disbelief. Even more so with science-fiction when the patently impossible is presented as a fait accompli.  However one can accept this if one is given a plausible plot. (Which is why we don’t mind rubber monsters and wobbly sets on old episodes of Doctor Who and Star Trek).
In my honest opinion throwing away plausibility in favour of special effects and explosions merely undermines the program’s credibility. Having now watched two episodes of Torchwood I am reminded of something Alexei Sayle once did – click on this link and watch from one minute twenty eight seconds to three minutes. (And do watch the rest – I do like Alexei)…
Posted by Manky Badger at 11:28 pm