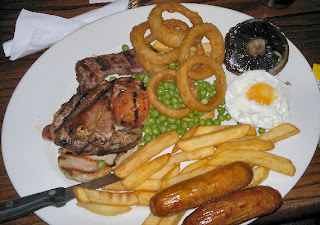 A late start gave me time to check out what’s new on Google News. Here’s a sign of the times - Deborah Copaken Kogan’s son was rather ill, and she posted a photo of said flagging youngster on Facebook. From that photo a cyber-friend was able to diagnose what was up with the child, and immediate hospitalisation ensued. Perhaps I should do that with my maladies bearing in mind the problems I have with my GP surgery.

And then there were a million and one news items about football. It’s no secret that I don’t like football. Not only is the game somewhat simplistic, I simply cannot understand the fervour and excitement and hysteria it generates. Some Paraguisian fit bird has flopped “them” out simply because her favourite football team has won their game. And not to be outdone, a Dutch lady of loose morals has offered a slurp to all and sundry should her favoured football team win this weekend.
I really can’t understand the passion and excitement football inspires….

Following the “chesticles” theme, there was an article on the radio which made me smile this morning. A very dull chap from the Government’s biodiversity department was droning on about Biodiversity Action Plans. The interviewer soon got fed up with the phrase “Biodiversity Action Plan” and shortened it to the accepted acronym B.A.P. And the rest of the discussion was about baps. The schoolboy in me was sniggering about baps, and sniggering all the more as the very dull Government spokesman had absolutely no idea that a bap could be anything other than a “Biodiversity Action Plan”. The interviewer himself wasn’t missing an opportunity to bring baps into the conversation. It transpired that lots of bodies have baps, some baps are bigger than others, but the problem is that the public has very little awareness of them. The interviewer was obviously near hysterics himself when he suggested that everyone with baps should get them out in the open for all to see.
And people tell me that Radio Four is boring.

After work it was up to Wetherspoons – Chris’s birthday meal and a work event “Meat with Pete”. I shall do the Wetherspoons steak night again. Very tasty…..