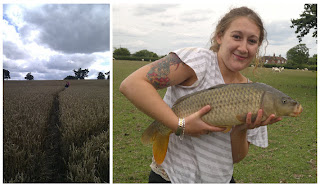 Bearing in mind the amount and variety of ales I guzzled yesterday, I woke this morning feeling relatively chipper. Over brekkie I spent a little while mucking about on the PC – two pump clips to design for the two beers that are ready for next week’s garden party, and then to actually tell everyone about next week’s garden party. I’m hoping that I’ve got the message to everyone – if any of my loyal readers haven’t got the info for the garden party, please let me know.
The post came – I had a letter from the water company to tell me that they’d compulsorily purchased the sewer coming out of my house. At first I was a tad miffed to have anything of mine compulsorily purchased. But on reflection bearing in mind the problems we had a little while back when the drains were bunged up, I decided that if someone else wanted to take on the responsibility for my cack pipe, they would be welcome to it. The water company have made a nice little film about cack pipes, and on watching it, it don’t look like they’ve  compulsorily purchased as much as I thought they might have done. I was hoping that they were going to take command of the pipe from the chod-bin onwards. But they are not – I remain responsible for my sewerage up to the point where it joins the common sewer. I’ve taken a tape measure to it – I remain responsible for four feet of cack-pipe.
I shall (like most of humanity, I suppose) continue hoping that my length of cack pipe remains trouble-free.
I see my favicon is now working: a “favicon” is that little picture next to the web page title that appears in your drop-down “favourites” menu. It’s taken me a little while to get the thing sorted, but finally its working. Or that is, it’s working on my PC. Is it on yours?
Having said that, there are one or two of my loyal readers who, despite tuning in every day, don’t actually have me on their “favourites” list, but use Yahoo to look up the website. Why not add the blog to your “favourites” list – it will save you time every morning.
Chip came round, and we set off to Pluckley for a bit of a stroll. I’ve mentioned before that ‘er indoors TM  has a set of guided tours round Kent, and today we did Pluckley to Chart Forstall and back. A really nice walk; very scenic. We mucked about with some horses on the way, admired some duck ponds, and didn’t really get that lost. We did take a wrong turn coming back through some orchards, but there were lots of paths we could have taken, and it’s really up to the landowners to signpost the paths better. Still, no one caught us coming out of a driveway labelled “Strictly Private – No footpath – No bridleway- Trespassers will be Executed”, so I think we got away with that one. As luck would have it we’d parked by the pub, so we deserved a crafty half at the end of our hike.
Home, where I mucked about with some paperwork to do with the next bit of the mortgage being paid off. I can’t wait until it’s all paid off – however the endowments we took out certainly turned out to be far from what they were described at the time. Hindsight is a wonderful thing.
“Daddies Little Angel TM ” then came home – she had post to open: college results. She’d managed a triple distinction in her BTEC course. I’m quite pleased about that: especially when one bears in mind that it doesn’t seem that long since I used to drag her physically to the school, only to have her escape again.
And then an evening’s fishing where “Daddies Little Angel TM ” excelled herself (again). I always maintain that the fun of tiddler bashing is that in between the tiddlers you occasionally catch a large fish. “Daddies Little Angel TM ” did this evening – a personal best 6½lb carp….
Posted by Manky Badger at 11:06 pm