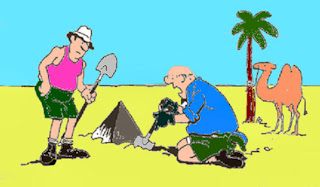 Here’s an interesting article. It would seem that due to all sorts of financial cutbacks the number of professional arky-ologists is falling. Therefore there aren’t enough qualified arky-ologists to go round. So whenever there is any hint of dead Romans having been skulking in the area, those who wonder what the dead Romans were up to are dependent on the likes of amateurs like me to scrubble about in the mud to retrieve the artefacts.
There are those who enjoy volunteering to scrubble about in mud trying to find artefacts. I am not one of them. There are various reasons for this. Personally I find the actual mechanics of practical arky-ologee to be boring. I don’t enjoy it. Also it hurts. I get severe and very painful backache after only a few minutes of scrubbling.
But most importantly I don’t want to do it because I openly admit I have not got the faintest idea of what I should be looking for. In the past whilst on arky-ological digs I have found what (to me) looks like Roman Samianware, only to be told it is last year’s flowerpot. I have then had a bit of genuine Roman Samianware put next to my bit of flower pot, and to me they both look exactly the same. Having me doing the digging is silly because I do not know what I should be looking for. For the sake of the historical record it is actually dangerous to have me on a dig if I cannot tell artefact from scrat, and I openly admit this fact. And I suspect this is true of a lot of amateur arky-ologists who also I suspect would never make this confession.
I can’t help but wonder how many significant finds have been missed because the well-meaning volunteer doesn’t know their arse from their elbow in an arky-ological context.
Scrubbling in the mud should be left to those who know what they are doing. However…. And there is always a “however”, isn’t there? It would seem that a few years ago the amateurs were discouraged from scrubbling after artefacts. And what happened? Rather than taking up stamp collecting or train spotting or drinking real ale or going fishing or flying a kite or getting a life, these amateurs bought metal detectors and just went off on their own to see what they could find.
And some of these metal detectorists seriously have done damage: here’s a link. And here’s another. And another. And if you’re still sceptical about how much destruction amateurs have done to sites of historical importance, I’d suggest just come along to the arky-ologee club; pretend you’ve got a metal detector, and see if you get out of the room alive.
So what’s the future of arky-ologee? Are potential dig sites to be left until the shrinking number of professionals can get round to them? Are the likes of me to be left to stuff up what’s under the ground? Should volunteer arky-ologists need some formal training or qualification before they are let loose? The obvious answer is to share out the professionals: let those who actually have got a clue supervise those of us who haven’t.
Or alternatively we might realise that if a piece of historical antiquity is actually of any value, some dead Roman wouldn’t have been so careless as to have dropped it in a ditch all those years ago…..
Posted by Manky Badger at 8:26 pm