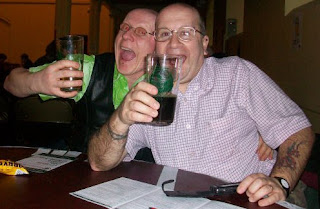 Beer is good for you – it’s official! But not just any kind of beer. Science has found that lager really is chemically conditioned rubbish, whilst the nectar that is ale and stout actually helps defend the body against brittle bones. Time for a crafty half, methinks…

Mind you science has also found that the nicotine from fags smoked years ago can still be harmful. Apparently once it’s stained the paintwork it sets off a low level generation of dangerous carcinogens. One lives and learns.

To work where I had a phone call from a potential employer. Not someone who might potentially employ me, but someone seriously considering employing one Akshi Hanu. (Who’s he? Or She?)

It would seem that Akashi Hanu has given me as a reference, because I employed him/her/it in my department in 2006. I have no recollection of this person, but I make a point of making a few notes everyone who could possibly ask me for a reference. My list made no mention of Akshi. The person wanting a reference became quite irate; they are busy people – could I not just give them the reference and stop wasting their time? The implication was that maybe I might make something up and put my name to it. They weren’t happy when I said no.

And then home again. A somewhat strange evening – Tuesdays are traditionally “the gathering”, but what with my beloved working this evening and being on a late shift myself I just went home. And didn’t get home till 8.45pm. The plan for the evening was to help out with college work, but “Daddies Little Angel TM ” has still to collate her figures (!), so homework was put on hold.

Meanwhile my Internet connection is still running at 2.7 mega-newtons per cubic parsec. I wonder if I should reboot my router….