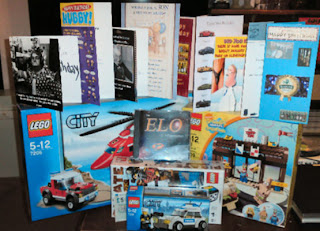 Some time in 1994 a group of about twenty of us went to Planet Lazer in and had such a good time. We all came out on such a high that none of us could sleep that night. I can only liken last night to that evening in all those years ago – I was awake most of last night with the songs of E.L.O. running through my head.

I eventually gave up laying awake at 7am, and got up for some toast. And then to my pressies and cards. I’d been intrigued by one envelope which had arrived some time ago, and was obviously from a loyal reader, as it was clearly labelled “not to be opened until 45 12/12”. I had a decent haul of pressies – I got the CD of last night’s band, a bottle of Leffe (oh yes!) and quite a lot of lego. Regular readers of this nonsense will know I quite like a bit of lego.

Off to deepest for lunch with Simon and Corinne. The Johns Cross Inn in Robertsbridge is somewhere I visited occasionally over twenty years ago. Today it’s under new management, and as well as the ubiquitous , they featured Castle ale from the Arundel brewery. A new one to me, so a couple of pints of that slipped down very nicely with a plate of spicy Persian lamb.

We then popped next door to the camping centre – not so much to buy anything as to get some ideas as to what’s new in the world of camping. Having said that, my sleeping bag has seen better days (I bought the thing for the trip of four years ago). And our tent is getting a bit threadbare in places. I might go backas the camping season gets nearer. I also got a photo for “CrackWatch” purposes.

All things considered, it was a good afternoon out – shame the rain didn’t let up at all.

And then home for a lazy evening in front of the telly. After the band last night I’m quite worn out….