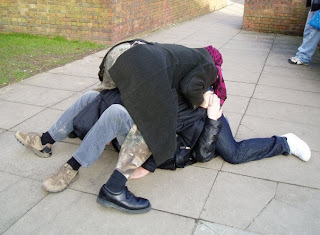 Yesterday I didn’t quite get as much painted as I intended. But being on a late start today, I planned to do it before work. But I couldn’t – it was snowing. I have painted the house in the dark before, but painting in the snow – I don’t think so.

So I suppose we again brace ourselves for the pundits who foretell the end of the world, even though the forecast has the snow all over and done with by tomorrow.

And so to work (via the blizzard). Last week I mentioned that I’d had enough of Tesco. Today I went to Asda. To be fair the pre-packed salads (yuk!!) were slightly more expensive. But they were a lot bigger. And I object to having to pay in their car park, even if it is refundable.

But the biggest difference was that Asda is welcoming. There was a chap positioned to meet you as you come through the door. He smiled, he said hello. I’m not daft – I know he is paid to do that. But in Tescos there is no smile as you go in. Instead there is a quick glare of suspicion from the surly chap openly watching your every move on CCTV.

One place welcomes you with a smile, one with distrust. Tescos have lost a customer.

After a dull day at work I came home to find I have been tagged on sixty photographs of various events in several different Facebook albums. I am a great believer in photographs – and especially putting up albums of special events on the Internet. You find you’ll forget so much of your life if you don’t take the trouble to make a record of what happened. (Not drinking by the gallon probably helps too!!)

Take for example today’s photograph – a charming little interlude of my life which would otherwise be forgotten. I am the one on the top. You can tell that from my red headgear. I’m not sure who is underneath me, but in my world that can be an occupational hazard.

In the meantime, back to reality. I shall alternately be visiting YoVille and NeverWinter, still at a connection speed of 2.7Mbps. Whatever that is…