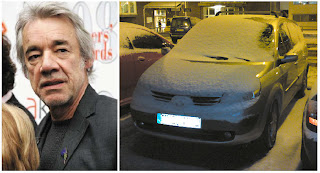 Up early to watch last night’s episode of “Survivors”. It featured Roger Lloyd Pack in a leading role. Fans of the genre will remember that Mr Lloyd Pack also featured in the original 1970s “Survivors” series, and so it was a nice touch to have him in the remake. And it’s good to see him playing a villain. For so many years he was the likeable idiot with Del Boy, but just lately he’s been the creator of the cybermen in Doctor Who, and now he’s… I won’t give the game away.

But again I was disappointed with the program. Why make two character bosom buddies when in last week’s episode they loathed each other? And I predict that the two remaining episodes will feature the team going off to rescue those remaining characters whose turn it is to be kidnapped for no adequately explored reason.

And then the forecast snow came. Flurries were clearly visible outside, some lasting for up to five minutes. The first inch of snow melted once there was a break in the clouds, but after dark the snow came back with a vengeance, and there is now a good inch of snow about, and so once more grinds to a halt. Some of my colleagues left work early, not expecting to return for some time. The radio carried the news that the entire town of was cut off by as much as a couple of inches of snow. Seriously!! – Two inches of snow, and is now officially inaccessible. It said so on the radio, so it must be true…

And I’ve lost my sledge.