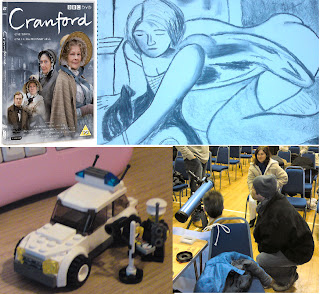 The end of the week, and there is still so much not done. Things planned for the week included mucking out the pond filter in readiness for spring and painting the tops of the fence panels and the shed. I’ve two astronomy presentations I need to complete, and I’d even intended giving the front of the house another coat of paint. But it has to be said I’ve had a busy week, so having a day slobbing about wouldn’t be that bad really.

I say “slobbing about” – I got up at 8am and after a belt of brekky I started on the ironing. I’ve not done any for some time, so that took a couple of hours. Then to sort the underwear. Easier said than done. Bearing in mind that everyone in the house but me takes their undercrackers straight out of the undercracker basket, how does it get so full? That wasted another hour. And then I went through our video collection. Videos – remember them? I found over twenty videos that we’ve replaced with DVDs over the year to I boxed them up for the tip. There are those that might think it wasteful, but yesterday I asked in CEX (the recycle-everything shop) about whether they took videos. They weren’t rude, but neither were they interested. Charity shops are full of videos they can’t sell, and I remember there being cases and cases of videos in the scout hut that are in everyone’s way.

Whilst slobbing about, I watched the entire series of – a BBC costume drama I’d borrowed on DVD. I’d mentioned at work that I’d liked “Pride and Prejudice”, and was told that I’d probably love . I did.

A holiday isn’t a holiday without a run to the tip. I got shot of a couple of bags of tat and the videos and then went to the college to collect “Daddies Little Angel TM ” who’s being doing sketches. And then I completed my homework. A friend has written a book, and I’ve been invited to read it, and make constructive comments. It’s a good book - what happens is… No – I won’t spoil the plot. But I enjoyed it immensely. And what I especially enjoyed was the power I had whilst reading it.

Recently I commented on how much I disliked the recent second series of “Survivors”, because of so many inconsistencies. To have the power to point out any such problems before they appeared to the general public was quite awesome.

Earlier in the week I got quite a bit of lego for my birthday. Today I put the smallest kit together. I’m looking forward to doing the rest – once I can scare up some space to do so.

And then seeing as how it was the last Friday of the month I set off to the astro club. I did my usual thing of putting out the chairs, and managed to knack my back lifting a chair. How silly is that? – One chair and I could hardly move. Interestingly the raffle proved very popular tonight, with people wanting to buy their tickets at the start of the evening, rather than at tea break (which is customary). I saw that as a thinly veiled ruse to stop me shouting at tea time, but it didn’t work. I still hawked the raffle as loudly as ever.

The talk was on telescopes, and then after tea we collimated, and adjourned outside to where a dozen telescopes had been put out. We saw Mars and Saturn, and the M3 (which didn’t go to !). A really good time was had by all.

It’s just a shame I’ve done my back…