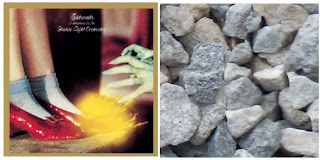 Yesterday Dan-The-Tattoo-Man warned me that when I woke up I may well have a dead leg. He wasn’t joking. When I got up I was hopping about for several minutes as there was no sensation whatsoever in my tattooed leg. Eventually the thing came back to a semblance of normality, but it really has been tender today. It’s OK all the time I’m moving about, but when I stop, the thing tends to seize up. It will get better eventually, I suppose. And when it does I shall go through the entire process again to get the thing finished. It poured hard with rain pretty much all day today as well, but I was determined not to let petty things such as wet weather and the inability to move about stop me enjoying a day’s holiday.

A quick bit of brekky, and then I hobbled to the car. First of all to HMV in Ashford – I’d been promising myself a CD for some time. Specifically E.L.O.’s “Eldorado”. If you’ve never heard it, it’s a concept album following someone whose life is so dull and mundane he spends most of his time in imaginary fantasy adventures. I listened to the thing (several times) as I drove off here and there during the morning.

Firstly to Hawkhurst Koi centre. I’d heard they’d re-opened, and twenty five miles later I found that I’d heard wrongly. The place remains closed. From there I made my way home, firstly via Rolvenden’s World of Water where I picked up a new fluorescent tube for the pond’s filtration system. It’s still too early to turn the pumps on, but I thought I’d best get the tube whilst opportunity permitted. I got some blanketweed jollop whilst I was at it. I can’t wait to get the pond going again.

And then to Swallow Aquatics, if only for a look to see what fish they had. They’ve now got a huge catfish (four feet long) in a tank, but their Koi ponds were empty. Not just empty of fish, but empty of water too.

During the week “My Boy TM ” had mentioned about getting a shed for his fishing gear. As it wouldn’t be too far out of my way, I came home via Snargate to call into Bespoke Sheds. A strange place – the gates were wide open, there were signs warning of guard dogs and saying that customers entered at their own risk. I drove in and stayed in my car. And there was no one there – neither person nor guard dog.

Daco timber products in Brenzett were very helpful, or as helpful as someone with no sheds could be, and I eventually tracked down a shed sale in WyeVale in . A strange shop. Whilst WyeVale is (in my experience) a bit of a retard magnet, the branch is unique. It has an aroma all of it’s own. Well, not so much an aroma as… there’s no way to put it tactfully, the place stinks. Something, or several somethings have died somewhere inside the building. It reeks. But the chap in the shed section had the ideal shed at half price.

It was rather a shame to come home to find “My Boy TM ” wasn’t interested.

A sarnie for dinner, and I watched the last episode of “Survivors”. Utter tripe. Having seen the lot, that’s six hours of my life I want back. I then settled down to watch “Caprica” which I’ve been recording onto the Sky Plus box for a few weeks. It’s supposed to be a prequel to BattleStar Galactica, which I enjoyed immensely. I got three episodes of Caprica watched this afternoon. Did I like it? I slept through most of it, and found myself constantly waking up, rewinding what I’d missed and nodding off again. I shall give it more of a chance before I dismiss it out of hand, but I’m not impressed with what I’ve seen so far.

Being the last Wednesday of the month it was then off to Lenham for the arky-ologee club. Things started well with a fit bird turning up and wanting to join. But things soon went downhill.

Tonight was the Annual General Meeting which (I think it’s fair to say) exceeded the expectations of even the staunchest critics of the society. Despite having a written agenda, we managed to take all of the items in an utterly random order. Having done an agenda item to death we would then return to it two minutes later. The chairman’s report was done three times because the chairman kept forgetting bits. Even though the report was written down, and all the chairman had to do was read the report. The committee was elected. Twice. Chip got to be on the committee. Because he’s now “The Grand High Pum-Bar” (patent pending) he gets extra biscuits.

Once the A.G.M. part of the evening was officially declared closed (for the third time) we got on with what I’m reliably informed that some people thought was the interesting part of the evening. All I can say is that some people are easily pleased. Mavis had a slide show of Lenham’s Medieval fete of 1981, and she announced that she’d got her gizmo to work properly to complement the slide show with tasteful background music. I didn’t have the heart to tell Mavis she should take her gizmo back to the shop. Still, Mavis was an old trouper – the show must go on. And despite the abject failure of her gizmo, she was prepared to do an encore. She had a slide show of six minutes of Lenham in the snow during the middle ages.

Fortunately for my sanity, time was pressing on. Mavis’s second act was politely deferred until next time so that one of the new people could do “show and tell”. A normal person had turned up with some artifacts he wanted to share with the society. "Artifacts" (!) I know a bucket of rubble when I see one. Whilst several people had seen this bucket of rubble for what it was, I was the only person brave enough to say so.

I must admit, I haven’t enjoyed a meeting of the arky-ologee club so much for ages….