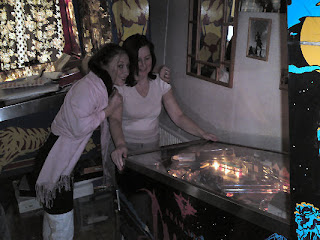 What with all the extra hours I put in at work last week, I didn’t have time to do what I’ve had in mind for some time. This morning I did it – a website of cycle routes. It’s very much a “work in progress”, but the idea is that eventually we’ll have a comprehensive list of cycle rides from central Ashford to various destinations of note all about an hour or so away. So far I’ve put down all the “primary destinations” of last year’s cycle outings. By that I mean the pubs we aimed for. On several (all) of the cycle trips we came home via other pubs, but at this stage I don’t want to overly complicate the thing. As the snow (hopefully) melts away we’ll be getting the bikes out again, so if any of my loyal readers have any ideas where we might cycle off to over the next few weeks, please let me know.

And then to YoVille where I’m trying to save up to buy a house. I blew some money at the casino. Normally I lose, but today I won twenty five quid before sneaking off for a crafty snog with Lisa’s mum. As virtual worlds go, it’s not bad. I can’t find any pubs in YoVille, but I shall keep looking.

To town for a quick bit of McDinner, and to take my ring to the jeweller’s. Last week I scratched it quite badly, and there’s a great big lump of metal sticking out where I actually tore the thing. It will be ready for fixing next weekend. We then got some supplies from , and then went to Chris’s where the clans were gathering for an afternoon of pinball and Wii. I was rubbish at pinball, and not much better at the Wii. But lack of ability has never stopped my from doing anything, and the evidence can been seen on You-Tube.

Home, and then round to Brian’s for dinner. Brian and Rachel had spent all day preparing dinner, and it was oh so good. We ate far too much, and I feel positively stuffed now…