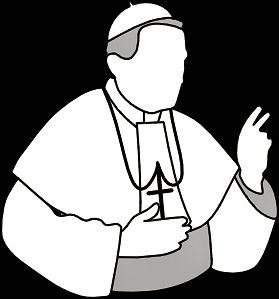 Today’s radio carried the news that the Pope has spoken against the British government. He doesn’t like our equality legislation. Which is entirely his right, and I admire the strength of his belief that he stands up and publicly says so.

Don’t get me wrong – I don’t admire what he actually says - personally I think he’s talking rubbish (again). I myself have no problem with people of any shape, size, colour or sexual orientation. It doesn’t bother me if someone wants to have gender altering surgery. Good for them.

But it bothers the Pope. What particularly bothers him is that all this equality malarkey means that (in theory) his church may no longer be allowed to discriminate against employing people who follow a lifestyle that his religion says is wrong.

So the old “gay vicar” controversy has raised its head yet again. Surely this has been done to death? If you believe in what the Pope trots out, then you believe being gay is a sin. So you don’t do it. So there are no gay vicars. Q.E.D. End of discussion.

But there are gay vicars. These people, and everyone who claims to be Christian but feel there is a place for homosexuals in the church amaze me. The Bible says it’s wrong. That’s the end of it. Or can we pick and choose which piece of our sacred texts we are going to believe, and which we are going to ignore?

All of which has given an opposing bunch of crackpots a free hand to stir trouble. The morning’s news told of those who are openly gay and transsexual who are planning to apply for jobs within the church. And are doing so purely to get turned down, so that they can then mount costly legal battles. Why are they doing this? What do they really hope to achieve?

Meanwhile President Obama has cancelled the moon base, and no one cares.