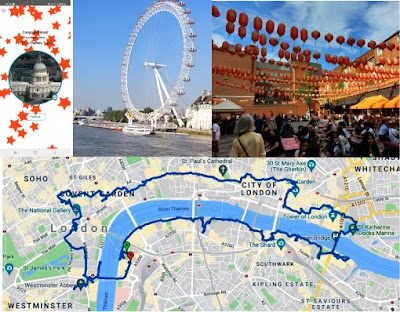 I woke with a seriously stiff neck. That was handy for today !
Over some toast I watched an episode of “Drifters”, sent out some birthday wishes, and got ready for the off. Having completely missed that there was a geo-Mega event in London last week I thought I might pop up to the wicked city on my day off and do the temporary Adventure Lab caches before they get archived next week.
I'd asked on the local geocaching Facebook group to see if there was any interest. There was some interest. Unfortunately quite a few people couldn’t make it as they were on holiday already, but there was enough interest to make me want to go ahead with a day out.

I got the train to Waterloo from where (after a quick solo virtual) I wandered down to the Jubilee Gardens by the London Eye (it is HUGE!!) where I soon met Pam and Brian and we set off on a little walk along the Thames. Before long we were joined by Richard and Millie and together we had a rather good (if tiring) day walking over thirteen miles.

Our route was laid out by the four series of Adventure Lab caches, and as geocaching so often does, we were taken to the oddities. The weird and wonderful places and things that the tourist guides never mention. I had no idea that there are sand beaches along the Thames. What was that amazing boat/ship thing near the Golden Hinde? The artwork in the underpasses was amazing. We found several hidden gardens and statues that most people would walk past without even seeing. We found rather odd chicken footprints across the pavements not far from Tower Bridge. I found the actual Savage Garden. I took photos of Mary Poppins and of Darth Vader. I got a selfie in the Iron Throne (from Game of Thrones) and a selfie with Mr Bean. And I’d never had a walk round the docklands developments before today.

We took in a lot of the regular tourist stuff too. We walked across Tower Bridge and round the Tower of London. We walked past (but not up) the Monument. We saw the balloons in Chinatown. We walked across Horse Guards Parade. We peered up Downing Street. We stared in admiration at St Pauls and the Shard. We rather upset the security at the Bank of England who didn’t like us looking at the engravings on their door. We got treated like dirt by the police pushing the proles out of the way so that some politician or other could be driven out of the Houses of Parliament.

We had coffee at Bankside and overlooking Trafalgar Square. Seeing the prices of food in the pubs (pie and a pint for seventeen quid!) we had a lunch from a burger van at Tower Hill.

I took quite a few photos as we walked today. Over a hundred!!

Amazingly for a day’s geocaching in London we stayed very focussed on our target which was the Adventure Lab caches: it is so easy to get geo-distracted in London. And after seven (and a bit) hours, thirteen and a half miles, forty-eight geo-finds and two geo-souvenirs we were back where we’d started and we said our goodbyes.. for this time. We will certainly be back.

I’ve done trips like this to London before. The trick to a day’s geocaching in London is to have a route and a plan, and there are several geocaches and series of geocaches in London which lend themselves to a day out.

On 5 February 2016 thirteen of us travelled all over London; on foot, on the tubes and on buses looking for the London Rainbow caches including the zebra crossing at Abbey Road as we went.

On 1 November 2016 a group of us went up the monument and to the source of the great plague looking for the Catastrophe, Calamity, Cataclysm series of caches.

On 4 December 2017 a load of us took a rather tortuous route from Trafalgar Square to Buckingham Palace via all sorts of places following the Central London Team Quests.

On 20 February 2018 half a dozen of us went in the footsteps of Jack the Ripper and finished off finding the last part of a twelve-stage trip round London pubs.

There’s other geocache missions still to do. There’s  loads of Adventure Lab caches which lend themselves to a day out. There’s a thirteen-stage multi which involves hunting aliens which goes all over the place in London.

But right now I’m looking at a ten-stage multi going to various sites in London. Starting at Tower Bridge the route goes through to the British Museum. I’m tentatively thinking some time in November for that one, but right now I’m thinking about how my legs ache, and whether I will be able to get off of this sofa…
Posted by Manky Badger at 10:01 pm