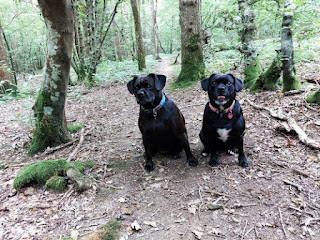 Treacle spent much of the night jumping off the bed then crying to be helped back up. When she finally settled (at half past four) so “er indoors TM” started snoring. I’d finally managed to nod off when “er indoors TM”’s alarm went off.

Leaving everyone else asleep I made toast and peered into the Internet. There was a post one of the local geocaching pages telling everyone to play nicely after yesterday’s spat. There had been a good spat on there yesterday afternoon in which someone had the arse because someone else had reported him to Geo-HQ for some trivial infringement of the rules. The infringement was very trivial, and had been blown out of all proportion. I know what side of the spat I would have been on, but (amazingly) someone taking the opposing viewpoint had posted about how we shouldn’t be nasty to each other. This was the very same person who made a rather bitter, nasty, and utterly unprovoked personal attack at me on one of the national geocaching Facebook pages a few months ago. Yesterday I mentioned how the noble pursuit of hunting Tupperware is dying on its arse; internecine squabbling isn’t helping.

I sent out a couple of birthday wishes to people I’ve not seen for years then took the dogs down to Orlestone woods for a walk. As I drove the pundits on the radio were talking to a surgeon who has turned down the chance of being evacuated from Afghanistan. Instead the chap is going to remain in his clinic where he fits prosthetic artificial limbs to people who have lost them during the various conflicts. He remarked on how so many of his patients suddenly realise just how petty and trivial their religious and political differences are once their leg has been blown off.

We got to the woods which were rather busy today. We met six other people walking dogs. Six!! That’s unheard of. There was a little woofing but the walk passed off with no “episodes”.

We came home, I set the washing machine loose on some grubby clothes then mowed the lawn. Only a week since I last had a go at it, and the cuttings half-filled a dustbin. I hung the scrubbed washing out to dry, put dentist and optician dates into the diary, and then saw I had some emails. From both the people who administer my professional registration and from my professional body. I had to re-register with the first lot, and in doing so I had to agree to two things. Firstly was I keeping up to date with current trends in the world of testing blood? Well, yes I am. I write a blog to document what I do. Secondly I had to agree that I had professional indemnity insurance. Which I have through my professional body. Having said yes to both, I then had a look to see what my professional body wanted. They had written to say they were stopping the professional indemnity insurance from the end of this month.

That’s a bit of a nuisance.

I then spent a few minutes solving a geo-puzzle. I might go looking for it when I am next heading off in that direction in a couple of months’ time.

And suddenly the morning had just gone and it was bed time.

I went to bed to find Treacle had beaten me there. I stayed in bed for four hours; probably sleeping for three of them. Hopefully “er indoors TM” will boil up some dinner soon, and then I will start my standard “going to the night shift” routine. I will drive up the motorway singing along to my strange choice of music. I will go to Sainsburys where I will get a bottle of wine, shower gel, jam and marmalade to bring home and a sandwich, bar of crisps and four huge biccies for overnight. I will then drive to the works car park and park up in the spot closest to the hospital’s back door where I will drink a bottle of “Shaken Udder” salted caramel flavoured milk shake. I will then do the night shift, come out and wish I’d parked close to the car park exit as it will take an age to get through all the cars swarming round the car park.

I’m something of a creature of habit…
Posted by Manky Badger at 5:59 pm