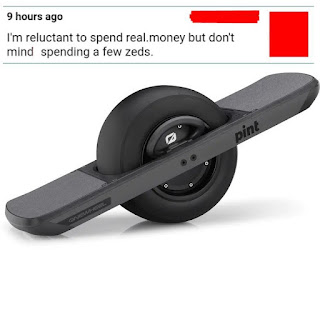 I had a better night last night, despite a rather vivid dream in which I caused consternation on the set of “Upstairs Downstairs” when I told them that they weren’t real but just characters in a TV show that had been cancelled forty years ago. That revelation was rather upsetting; I suppose it would come as a shock if you didn’t realise that.

As I scoffed toast I realised that my stomach was far more settled than it had been recently, which was a major result. I watched an episode of “Drifters” then peered into the Internet. The photo of my Advent Calendar had received over forty clicks of the Facebook “like” button.

I had a message from “Duran Hancock” who said “hello I'm a woman”, followed this with a little photo of a union jack, and then said that she was “thirsty for sex” and had followed this with a web link about which she said “look I'm not wearing panties here”. I decided not to look.

My piss boiled somewhat when I tuned into the Munzee clan chat. Playing Munzee isn't just about scanning bar codes stuck to lamp posts, you know. For me a large part of it is the monthly "Clan War" in which we team up in groups of up to ten players and together have to achieve certain goals and targets (both as individuals and as a team) for which we get in-game rewards and credits. Whilst it gives me something to do on the way to and from work, more and more I'm feeling that the "team" aspect is somewhat missing. More and more it is me and “er indoors TM”  (and one or two others) doing the lion's share of work for the team targets, with some others very noticeably doing bare minimum effort. One of them posted in the clan chat late last night. It was rather obvious that she was struggling to meet her individual requirements and had been asked if she needed any help. In her reply she mentioned that she was happy to use the in-game credit she'd built up but didn't want to spend real money.

I spend about a tenner each month on that silly game, as does “er indoors TM”... Perhaps we won't next month...

Making a point of pretending not to see not-so-nice-next-door starting her strange fast walk (which she does every morning at half past six) I set off to work.

As I drove the pundits on the radio were talking about how half a dozen power companies have gone bust this month. Millions of people have been left wondering who they are now having to pay for their gas and electricity. And all the remaining power companies are desperately hoping it won't be them. Why don't they want more customers? The power companies are having to pay rapidly increasing prices for the power they get, but there is a limit (enforced by law) on how much they can charge the customers.

The whole point of the government's selling off the nation's power providers (all those years ago) was so that someone (the people in the government and all their chums) could make a profit. But if you are buying something for a quid and being told you can't sell it for more than fifty pence then there's not a lot of profit to be had, is there?

Did no one else see this one coming?

And  the Prime Minister has upset the French even more. With them already up in arms about the ongoing Australian nuclear submarine row,  he's said: “I just think it’s time for some of our dearest friends around the world to ‘prenez un grip’ about this and ‘donnez moi un break’.

On the one hand it is a firm and deliberate kick in the goolies to UK/EU relations. On the other hand it is a sure-fire vote winner for  the Prime Minister. Whilst I wish he hadn't said it, I can't help but chuckle. This is typical of  the Prime Minister, isn't it? He knows just what to say to impress the masses who will lap this up.

I got to work for the early shift and got on with that out of which I couldn't skive. I had my annual appraisal today. It seemed to go well; the boss seemed impressed with me. But I couldn't really take it seriously. I can remember another appraisal ten and a bit years ago which also gave me a glowing report only to then get sacked for (supposed) gross incompetence only a few short weeks later. Looking back from this remove in time I'm pretty sure that the (admittedly serious) mistake I made at the time was used as an excuse for a rather incompetent manager to get rid of someone who she didn't like. Again looking back I could probably made a case for constructive dismissal. But ten years on I am in a far better place than I was. As Wallace once said to Gromit "all's well that ends well".

With work done I came home and took the dogs down to Orlestone Woods. We had a little explore and went down a little path I’ve not followed before. In the depths of the woods we heard voices, and then saw a couple of lads on OneWheel Pints. I’d never seen one before. A OneWheel Pint is an off-road electric toy – a sort of a cross between a skateboard and a Segway. The lads were over a mile from the closest tarmac path so the things must work well off-road. I had an idea of getting one for myself; with a top speed of sixteen miles per hour I could zoom about after the dogs on it rather faster than I do at the moment. With a range of twelve miles it wouldn’t let me down half-way round the woods. I then came home and looked them up… They only cost a shade over a thousand quid…

Maybe I could buy one from the money I stop spending on Munzee?
Posted by Manky Badger at 9:38 pm