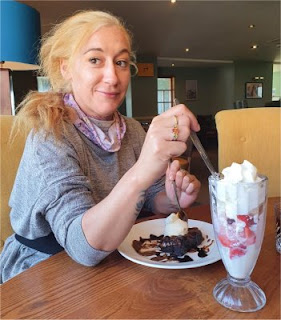 Over brekkie I watched the last episode of the current series of “This Time” with Alan Partridge. I do like the show even if I feel I’ve seen it all before. And as Sid snored I peered into the Internet to see what I’ve missed.

As I turned on Facebook it suggested I keep my page up to date. The page it mentioned was the one about my old Boys Brigade group. I set the thing up some time ago and it really hasn’t taken off like I’d hoped. Realistically I should do something with it or delete it. I wonder if I might do something with it. The 8th Hastings Boys Brigade company started some time in the 1950s (I think) and finally packed up about ten or so years ago (I think). I’ve got quite a bit of the history from 1975 to 1984 covered, but I have no idea about the rest. I wonder if I might tap up some of the other Hastings-related Facebook pages to see if anyone else who was a member at other times might have some memories and photos, and see if I can’t record some history.

I set off to work and really couldn’t be bothered with the news this morning. Instead I got out my Ivor Biggun CD collection and sang along with “The Winker’s Album (misprint)”; amazing myself that I remembered all the words of songs I’ve not sung in over ten years.

Before I walked in to work I popped in to the branch of Marks & Spencer in the hospital where I got cakes and cookies for everyone. Had I known the price, I would have gone to Sainsburys when I’d got petrol earlier. Marks and Spencer were (quite literally) double the price of Sainsburys. A bag of five cookies that costs a quid in Sainsburys was two quid in M&S.

Mind you, everyone scoffed them anyway.

As I worked so my phone beeped. Scratchleyu Saidmagomed had sent me a friend request on Facebook. She (I think) wondered if I would like to join her snapchat group of women who need a partner. I had the option to join to get the women I want. Looking at Scratchleyu’s chest I thought I might be well advised to give that sort of thing a miss.

Work was work, I did my bit, and came home singing along to another Ivor Biggun album. “More Filth Dirt Cheap” is still funny forty years after I first heard it.

Once home we settled the dogs, and I learned something. Picking Sid up is a mistake as it worries him and he pees everywhere. It is quicker to chivvy him into where you want him to go than it is to move him and then clear the pee.
With dogs actually settled and pee cleared we collected “My Boy TM” and drove to The Brickfield in Folkestone where we met “Daddy’s Little Angel TM” and Cheryl who had spent the morning horse riding (and falling off!). We’d booked dinner in honour of “Daddy’s Little Angel TM”’s birthday.

We went through several frankly ridiculous COVID precautions; it is amazing how people who know nothing about infection control have completely misunderstood what is actually quite simple precautions.
The waitress came to take the order…Seeing that they had Wainwright’s ale in bottles I asked for one of those. That caused confusion when she could not understand the difference between “Wainwrights” and “White Wine”. So I walked up to the bar, pointed at the bottle and asked if they had any that hadn’t been in the fridge. The spotty oik masquerading as a barman then got involved and (rather aggressively) said that anything in a bottle has to be in the fridge. And then a manageress came over and said that she agreed that ale shouldn’t be in the fridge but it had to be because of health and safety requirements (!)
I told her that I was in an argument that I didn’t need or want, and went and had dinner. It wasn’t a bad bit of dinner, but it certainly wasn’t worth what it cost. Mind you, dinner rarely is when you eat out at these big chain restaurants.

It was only a shame that my credit card got declined when I came to pay.

I slept most of the way home. Once home I walked Sid round the block whilst er indoors TM” took Pogo and Treacle to the co-op field, then called up the bank to find why my credit card had been declined earlier. They had no record of the thing having been given the thumbs-down. Apparently if I try again in five days’ time they might have an answer for me…

I’m not impressed…
Posted by Manky Badger at 8:51 pm