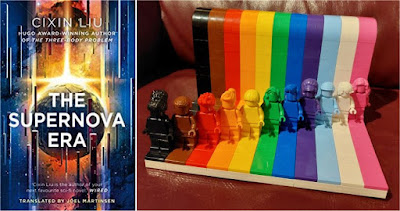 Another restless night… I only seem to get a proper night’s sleep just after a night shift. I slept like a log last night up until two o’clock, then woke every twenty minutes.

I got up, made brekkie, and as yet another negative COVID test incubated I watched half an episode of “Fresh Meat” before having a quick look at the Internet. It was still there, but not a lot was happening.

I got ready for work and set off..

As I walked down the road to find my car my phone beeped. A message from the Munzee clan. I stepped down as Munzee clan leader last month (I wasn't feeling it what with Fudge having gone and Sid looking very ill) so someone else took over from me. In all honesty there wasn't much to take over, but this morning I found out that my successor has made even less effort than I have this month and so the clan isn't going to reach its target (and consequently not get the rewards). All rather trivial in the great scheme of things, but quite a major issue if sticking bar codes onto lamp posts is what floats your boat.

I drove through the drizzle up the motorway with my piss boiling as I listened to the radio. Shop workers all over the country in little corner shops and in large supermarkets (Morrisons, Marks and Spencer and Sainsburys were all mentioned by name) are getting rather fed up of being physically assaulted by customers and the police are doing absolutely nothing about it.

I can't say I'm surprised... Well, I'm rather shocked that this is happening, but (quite frankly) the police's response is exactly what I've come to expect of them. I've mentioned before how I have absolutely no confidence whatsoever in the police to do absolutely anything at all that you might traditionally expect of a policeman. Yet again they do nothing when a crime has clearly been committed. Which isn't to say that the police do nothing at all. I've had coppers victimising me personally twice in the last year. (Once for daring to visit my Dad just after my mum died, and once when I was supposedly at fault when some strange passer-by decided to whip Pogo with brambles for no reason whatsoever).

It would seem that I'm not alone in feeling this way. Serving policemen do too.

Perhaps if we had a police force  that kicked arse where arse needs kicking (rather than picking on those who arse does not) perhaps society might be better...?

I got to work and cracked on with the early shift. At tea break I finished the e-book I was reading. "The Supernova Era" by Cixin Liu was rather good. I've always liked post-apocalyptic fiction and this book was not too shabby at all (to quote “My Boy TM”). Imagine "Lord Of The Flies" on a global scale. A colleague recommended the e-book, and now I've finished it I've downloaded another by the same author. So far I'm quite impressed with what I've read of his books. He seems to be an up-to-date Chinese Arthur C Clarke.

I came home via Lidl. I got a bottle of wine which cheered up an otherwise dull shopping basket, and then spent an hour longer than usual trying to get home along a bunged-up motorway. I had planned to take Treacle for a little walk, but it was raining rather hard when I finally got home.

er indoors TM” boiled up a very good bit of dinner then vanished off upstairs to Zoom at her friends. I opened the Lego pressie that my colleagues had given me on Friday. The sensible part of me said to keep it unopened and pristine in its box and to sell it for an absolute fortune in a few years’ time. But it is no secret that “sensible” has never really played a large part in my life.

The set took about forty-five minutes to build. From a Lego builder’s point of view this is one of the best sets ever. Bright colours, straightforward build, unique pieces… it’s got pride of place in the living room above the telly between the SkyQ box and the DVD player…

I *might* take it apart and rebuild it with the orange and yellow swapped over with the black and the brown. At the moment the darkest part is on the edge and it doesn’t stand out as well as it might.
Posted by Manky Badger at 9:08 pm