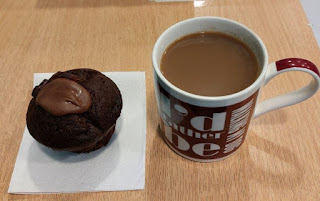 Having spent much of yesterday feeling rather grim I slept like a log and woke this morning feeling better than I had been, but still not one hundred per cent. Taking care not to wake Sid I made brekkie and scoffed it whilst watching an episode of “Hardy Bucks” in which our heroes were something of a disappointment to all and sundry.

I then had my morning’s rummage round the Internet. It was fairly peaceful this morning with no squabbles kicking off. My in-box was also dull; the only email of note was from the Neighbourhood Watch people telling me of local crimes. I say “local”; there was only one crime which could be considered “local”. All the rest of them have happened miles away.  Which was probably for the best.

As I drove to work the pundits on the radio were interviewing one of the head honchos of Cumbria's chamber of commerce. They had been looking forward to the end of lockdown restrictions until it became clear that the entire area is very dependent on tourism. Apparently there isn't a single hotel or pub in the entire area that is able to fill its vacancies and they won't be able to handle the expected influx of tourists. Having been used to an abundant supply of eastern European staff prepared to work for minimum wage, the hospitality industry is now pretending to be surprised that Brexit has persuaded most of these people to go home. And (you couldn't make this up) having been instrumental in making all those workers want to go home, Wetherspoons boss Tim Martin is now asking them all to come back again.

There was also talk about how the costs of veterinary treatment is going through the roof as so many veterinary practices are being bought out by private equity companies. It was claimed that pet owners are being faced with ridiculously high bills as a result. I must admit I'm glad someone has recognised the problem. In his last few weeks Fudge ran up a bill of over two thousand pounds.

Just as I got to work so my phone pinged. Gordon had tagged me in a memory. Five years ago today he and I (and dogs) had walked round the Biggin Hill area and he'd sent me a lovely picture of me and Fudge. That set me off...  Fudge liked seeing Gordon and Norton. For all that he was a rather independent Tripe Hound, Fudge always recognised his friends. He used to get very excited when he saw Gordon and Norton whenever we met.

I miss our mid-week meet-ups. About the only thing I don't like with my current job is I don't get quite so much time off mid-week to go walking.

On the other hand one of the many things I do like about my current job is the amount of cake that goes with it. Today was a cake day. I was rather pleased about that.

With er indoors TM” off visiting “Daddy’s Little Angel TM” I was left home alone this evening. Usually I’d forage for dinner up at the KFC, but tonight I wasn’t feeling in a KFC sort of mood. I made some toast and quietly watched a few episodes of “Hardy Boys”. I wonder if I’ve still got sunstroke (or “sun poisoning” as my cousin called it on Facebook yesterday).

Yesterday was dull… so was today.