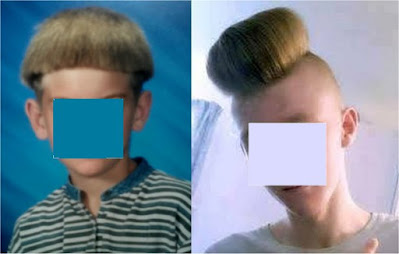 The alarm went off much earlier than usual today (as I was on early shift) but I was glad that it had done so. I had been embroiled in a nightmare in which I was running a post-apocalyptic blood-testing laboratory which had been invaded by the Church of England’s granny battalion which was looking for families for the orphans they’d gone round collecting. For some unexplained reason the old dears in the Church of England’s granny battalion then went psycho, the orphans had then killed the grannies in self-defence, and I was left looking after dozens of murderous angelic five-year-olds. Try doing that whilst attempting to secure some Duffy-negative O Pos blood (!)

I blame that bottle of cheap white wine we had last night. The sound of my phone (literally) saying “Get your arse out of its pit” came as a blessed relief.

Taking care not to wake Sid I made toast, watched an episode of “Hardy Boys” then sparked up my lap-top. Overnight someone in cyber-space had been fiddling. The Firefox browser had been updated, but in a novel break with tradition it still worked. Most I.T. (so-called) upgrades involve whatever it is that has been upgraded looking incredibly fancy, but being far less able to do the job than it was before the upgrade.

Facebook was mostly quiet this morning. There were one or two grumbles on the fishing pages from people who hadn’t gone fishing locally last night because of the weather forecast. They had the hump because the forecast rain hadn’t happened, and those who had gone fishing had had a really good night.

I sent out birthday wishes via Facebook, and the wish got a “like” from the birthday girl at ten past six. Ten past six!! On your birthday, Sarah?!

I set off for work as I do. As I drove off the first thing I heard on the radio was "and that was Carthy with the sport" and I breathed a sigh of relief. If there is one thing more boring that watching sport it is listening to people droning on about it. Regardless of there not having been any sport news at all, Radio Four have five minutes devoted to sport every hour in which various windbags pontificate. If nothing has happened then they just speculate on the what-if and the might-be  It really is a waste of air-time. Why do they have it on? I suppose (as always) I'm in the minority and most people do want to hear the latest trivia, what-if and might-be about whatever obscure football or cricket game has happened in some far-flung corner of the world.

Mind you for all that sport news is dull, so was today's world news. Pretty much nothing had happened  in the world. The pundits on the radio were trying to make a big thing about Portugal having been moved to the "Amber List" of holiday destinations and there were calls for the government to postpone easing lockdown restrictions, but what does anyone expect. Global pandemics go over years. The morning's news programs often seem to be more suited to blowing trivia out of all proportion (and then having forgotten all about it in a day or so).

Work was work. There was no cake, but an early start made for an early finish. I’d been looking forward to the early finish all week having planned to take the dogs to the woods, but the rain was against that. However I was determined to make the most of the heavy rain. The dogs have stunk of stagnant pond ever since “Daddy’s Little Angel TM” walked them yesterday, so I had this plan that a walk in the rain might wash them clean(er).

With Pogo and Treacle walked (if not washed) I walked Sid. We didn’t go far as he wasn’t keen on the rain. We spent five minutes walking up to the new barber’s shop on the corner and back again. The new barber’s shop is odd. It seems to specialise in doing frankly ridiculous haircuts on teenaged lads, but having said that it never seems to be short of teenaged lads queueing up for frankly ridiculous haircuts.

er indoors TM” boiled up fish and chips and we scoffed it whilst watching the last episode of “Anne Boleyn”. Leaving aside the fact that Anne Boleyn wasn’t black there were one or two other glaring problems. Like Anne having a clockwork clock twenty years before the first one was invented.